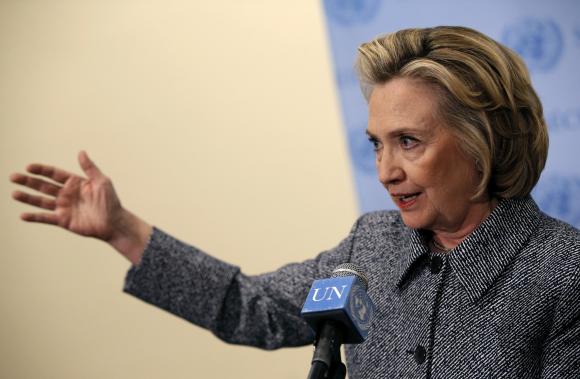 WASHINGTON (Reuters) - Controversy over emails could overshadow the launch of Hillary Clinton's expected presidential campaign after an influential Republican on Wednesday raised the prospect of congressional hearings into her use of personal email for work when she was America's top diplomat. Representative Trey Gowdy said he would like Clinton to testify in Congress by April about using a personal email address instead of a government one while she was secretary of state from 2009 to 2013. Clinton defended the practise on Tuesday, saying it was a "convenience" so that she wouldn't have to carry two mobile devices. But her attempt to defuse the controversy at a news conference appeared to have fallen short as opponents and news media raised further questions about her use of a private email address for official business and a private computer server at her home. Republicans likened Clinton's email habits to the secretive practices they say characterized President Bill Clinton's years in office. Gowdy chairs a House of Representatives committee investigating the 2012 attacks on a US diplomatic facility in Benghazi, Libya. He told MSNBC that Clinton should appear before that panel, or others. "I would like to have it done by April," he said. Clinton would likely face hostile questioning in the Republican-led Congress. Gowdy's timeline could clash with an expected announcement that Clinton is running for president in 2016. Democratic sources have said the former senator and first lady could formally announce her plans in April, although some of her advisers have argued for delaying until summer. PERSONAL OR PUBLIC? Republicans' concerns include the content of some 30,000 emails that Clinton terms as personal and that she did not give the State Department after leaving. Clinton has handed over to the government some 55,000 pages of other emails that she says were work-related. Questions also linger over the computer server. Clinton said Tuesday she would keep the server, which contained communications with her husband. A spokesman for Speaker John Boehner did not rule out the House seeking to compel Clinton to hand over the server. House Oversight Committee Chairman Jason Chaffetz, also a Republican, is prepared to subpoena Clinton to answer questions about her private email accounts, The Wall Street Journal reported. Clinton insisted she had done nothing wrong and had complied with all government policies. Most of her official emails were sent to government addresses, which were automatically preserved, Clinton said. Although Democratic donors played down the controversy when it surfaced, one donor said it portended a difficult general election campaign in 2016 dominated by noise about the Clinton family. "Is she still my first choice? Absolutely. Hands down would she be a fabulous president? Absolutely. But if this poses questions about electability, that’s what concerns me,” said Richard Chesley, a lawyer for DLA Piper who raised around $100,000 for President Barack Obama's re-election campaign in 2012. The State Department's office of inspector general said on Wednesday that the department has had problems with staff not storing and recording emails. Employees created only 61,156 record emails in 2011 out of more than a billion sent, and 41,749 record emails in 2013. "Some employees do not create record emails because they do not want to make the email available in searches or fear that this availability would inhibit debate about pending decisions," it said in a report. The Associated Press on Wednesday filed a lawsuit against the State Department to get access to emails and documents from Clinton's time as secretary of state.