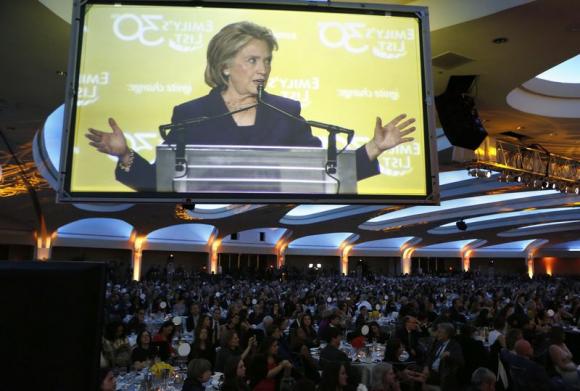 WASHINGTON (Reuters) - US Democrat Hillary Clinton on Wednesday broke her silence over a budding controversy involving her use of personal email for work when she was secretary of state, saying she wanted the US State Department to release them swiftly. Clinton's statement was aimed at cooling a political firestorm over allegations that she inappropriately used her personal email for work while secretary of state from 2009 to 2013. "I want the public to see my email," the potential 2016 presidential candidate said in a tweet. "I asked State to release them. They said they will review them for release as soon as possible." The controversy has suddenly put Clinton into trouble just as she is planning to launch a bid for the Democratic presidential nomination in 2016. It has prompted some Democrats to wonder whether someone else should be their candidate to succeed President Barack Obama. The State Department said it will review the emails provided by Clinton "using a normal process that guides such releases." "We will undertake this review as quickly as possible. Given the sheer volume of the document set, this review will take some time to complete," spokeswoman Marie Harf said. Clinton's tweeted statement came hours after a congressional committee investigating the Sept. 11, 2012, attack on a US diplomatic facility in Benghazi, Libya, issued subpoenas for her emails. The US House of Representatives' Select Committee on Benghazi demanded all communications from Clinton related to the incident, in which a US ambassador was killed. The panel also sent letters to Internet companies telling them to protect any documents relevant to the ongoing investigation, Jamal Ware, communications director for the Benghazi committee, said in a statement. Representative Trey Gowdy, the Republican chairman of the Benghazi panel, told reporters that within two weeks, he must either have the documents or a "really good explanation" for why not. Republicans have been scrutinizing Clinton's actions and communications surrounding the Benghazi attack, when Ambassador Chris Stevens and three others were killed during an assault on a US facility. Republican lawmakers believe she did not do enough to ensure the safety of Americans in Libya. Representative Elijah Cummings, the top Democrat on the Benghazi committee, said the Republicans' actions have led him to believe they simply want to attack Clinton. He noted that Colin Powell, the secretary of state under former President George W. Bush, a Republican, had used personal emails. The email controversy appears to have caught the Clinton camp off guard when it erupted. In an appearance in Washington on Tuesday night, Clinton avoided the topic altogether in a 30-minute speech at a gala dinner for the Emily's List political organization. The State Department has defended Clinton, saying that at the time there was no prohibition on using a personal email account for official business as long as it was preserved. But experts have called her use of personal email highly unusual and that her practise possibly left her communications open to hacking. The State Department said Clinton last year turned over emails from the period after a records request and that 300 of these were sent to the Benghazi committee. A total of 55,000 pages of material covering the time she was in office were turned over, the agency said. Jason R. Baron, a lawyer at Drinker Biddle & Reath who is a former director of litigation at the National Archives and Records Administration, said he believed "the sole use of a private email account by a high-level official to transact government business is plainly inconsistent with the Federal Records Act and longstanding policies of the National Archives."