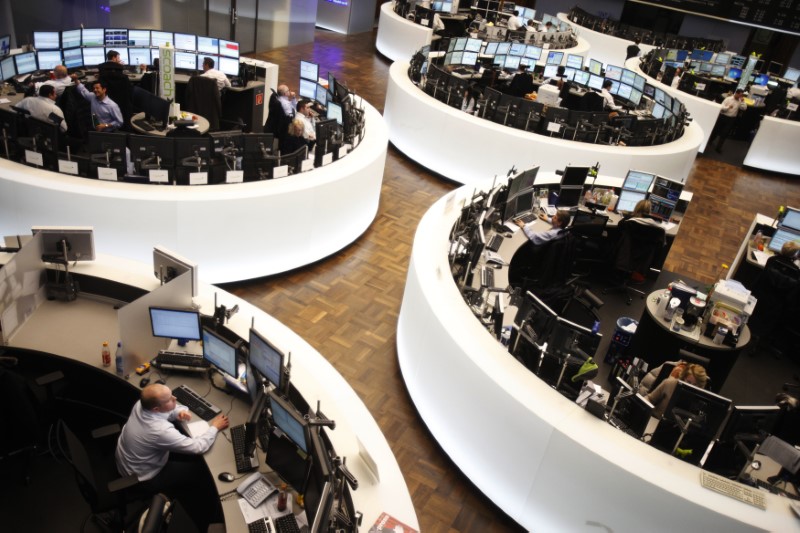 LONDON (Reuters) - A weak U.S. dollar combined with upbeat Chinese data to lift emerging market and Asian shares to levels not seen in more than two years and global stocks to an all-time high on Wednesday.

With the world's most widely-used currency near 10-month lows, there has been an indirect loosening of financial conditions for emerging markets which also serves to support riskier assets such as equities.

After decent gains in Asia on the back of positive signs from global economic powerhouse China this week, MSCI's world stocks index .MIWD00000PUS looked set for a ninth day of gains which would mark its longest winning streak since October 2015.

"Most emerging markets are doing quite well at the moment, especially in Asia. The figures for China are positive," said Marijke Zewuster, Head EM research, ABN AMRO.

"If you look at the underlying figures they are relatively strong at the moment."

The U.S. dollar - which dropped sharply on Tuesday after the collapse of a healthcare bill dealt a blow to President Donald Trump's ability to deliver promised fiscal reforms - could muster little more than tentative gains on Wednesday.

Analysts said the slight gains in the dollar were down to expectations the European Central Bank and the Bank of Japan may strike dovish tones when they meet on Thursday which could dent recent strength in the euro and the Japanese Yen.

The ECB is expected to adjust their language but substantive changes to their policy will likely come later in the year. The BOJ is expected to raise its growth forecast but cut its inflation outlook, underlining the cautious tone adopted recently by major central banks.

The euro inched down against the dollar EURO=EBBS, having made a 14-month top on Tuesday.

The diminished prospect of fiscal spending in the U.S. has been a boon to bonds, especially as a run of soft U.S. inflation readings had lessened the risk that the Federal Reserve would need to be aggressive in removing its stimulus.

Yields were broadly lower across the euro zone for a second straight day on Wednesday, with U.S. Treasury yields trading near three-week lows.

"The question marks over U.S. reform on the one hand, and the underlying economic growth momentum on the other hand are likely to keep the U.S. within its current goldilocks scenario for longer," wrote analysts at Morgan Stanley in a note.

"Globally, financial conditions tend to improve when the dollar is weak and vice versa," they added. "The falling dollar – still the globe's major reserve and funding currency – tends to see risk appetite flourishing."

While European stocks made a modest 0.4 percent gain , supported by a slew of upbeat earnings from firms, there were bigger gains in Asia and emerging markets. [.EU]

Those gains come on the back of data this week which showed China's economy expanding at a faster-than-expected 6.9 percent clip in the second quarter, setting the country on course to comfortably meet its 2017 growth target.

MSCI's index of Asia-Pacific shares outside Japan .MIAPJ0000PUS and its index of emerging market shares .MSCI were both up 0.5 percent at their highest since April 2015.

Shanghai's blue-chip CSI300 index .CSI300 rose 1 percent and back toward an 18-month peak, while Australia's main index added 0.9 percent. The strength of the yen limited Japan's Nikkei .N225 to a rise of 0.1 percent.

After making decent gains on Tuesday as the dollar dropped, oil prices edged lower after a rise in crude inventories and ongoing high output from OPEC producers revived concerns of a fuel supply overhang.