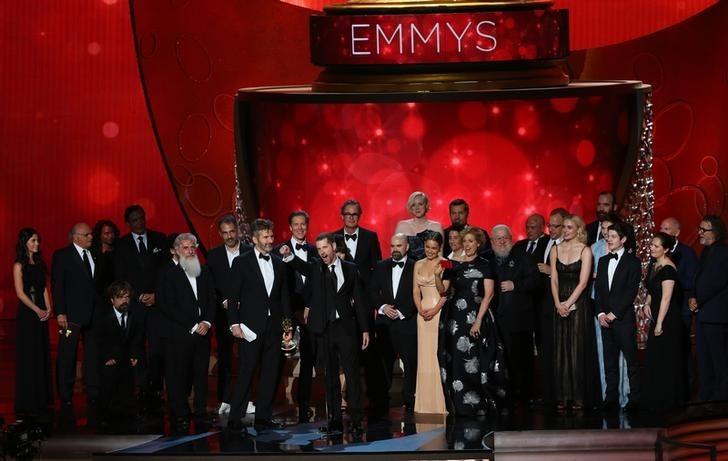 LOS ANGELES - The US television audience for Emmy Awards dropped to 11.3 million viewers on average, the lowest level on record in the 68-year history of the industry's highest honors, according to ratings data released by ABC. The three-hour ceremony hosted by Jimmy Kimmel was broadcast live on Walt Disney Co-owned ABC and competed against NBC's popular "Sunday Night Football," which generally draws the largest TV audience of the week. The game between the Green Bay Packers and Minnesota Vikings attracted about 22.8 million people, according to NBC, a unit of Comcast Corp. The number of Emmys viewers was down around 5 percent from last year, ABC said. The 2015 ceremony was broadcast on Fox. Sagging ratings have also hit other big entertainment awards shows, including the Oscars, which in February was watched on TV by just 34.3 million Americans compared with 43.7 million in 2015. The biggest Emmy winners this year were HBO's medieval fantasy hit "Game of Thrones," which won the coveted best drama series for a second year, and FX's much talked about dramatization of the 1995 O.J. Simpson trial, "The People v O.J. Simpson," which took home nine Emmys including best limited series. -Reuters