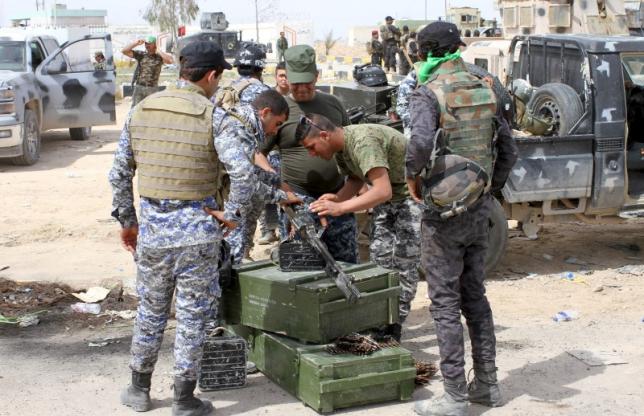 BAGHDAD - Iraqi security forces battled Islamic State militants in central Tikrit on Sunday as the United States and its allies provided aerial support and local officials warned that the battle to retake the Sunni Muslim city would not be quick. "A rapid advance in a city where the ground is littered with bombs and booby-traps is too tough to achieve," said Mayor Osama al-Tikriti. Islamic State fighters, whose goal is to create a Muslim caliphate across the Middle East, stormed into Tikrit last June during a lightning advance in which they seized swathes of Sunni Iraqi territory before finally being halted outside Baghdad. Complicating matters around Tikrit was a decision by most Iranian-backed Shi'ite armed groups to boycott the current offensive in protest against the US-led air strikes that began on Thursday at the request of the Baghdad government. The Shi'ite militias, aligned with Tehran, have repeatedly said they do not need US support to drive the Islamic State militants from Tikrit, home city of late Iraqi dictator Saddam Hussein. The security forces and Shi'ite militias, who provided the largest number of fighters, began their offensive on March 2 but halted operations after two weeks due to heavy casualties and tensions within the government and with US officials over Iran's prominent role. The battle remains slow-going. At least 17 security personnel have been killed in fighting and another 100 wounded around Tikrit since Thursday when the US air strikes began, a security officer told Reuters. On Sunday, an attempt to infiltrate Tikrit from the southern district of Shisheen was thwarted by militants. They used anti-tank missiles to destroy a bulldozer being used by the military to clear a path around booby-trapped roads, an official said. Fighting to the south of Tikrit underscored the high stakes of the war against Islamic State as even areas under government and militia control near Baghdad remain vulnerable to lightning-fast attacks by the Sunni jihadist fighters. Islamic State ambushed an Iraqi army and Shi'ite paramilitary base near Dujail on Sunday, killing six paramilitary volunteers and wounding 14 others, a security official said. The clashes in the countryside around Dujail, just 54 km (33 miles) from Baghdad, lasted until sunset and involved two suicide bombers and machine gunners in pickup trucks. In Baghdad, at least seven people were killed in three bombings on Sunday, while a soldier also died in a bomb blast targeting a convoy in Tarmiyah just north of the capital. - Reuters