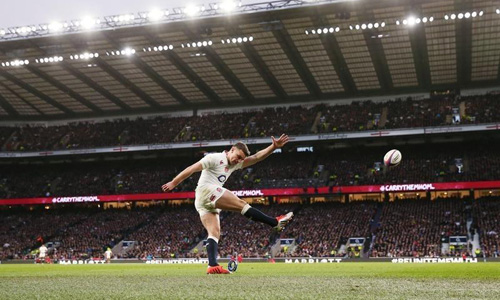 LONDON  - England won an extraordinary battle but agonisingly lost the war as they beat France by a record 55-35 in an extraodrinary Six Nations finale on Saturday but came up short of the 26-point victory they needed to deny Ireland a second successive title. After 80 unforgettable minutes, England were hammering the French line in search of one more converted try that would have given them the championship but could not quite complete the job in one of the most remarkable tests ever seen at Twickenham. After Ireland's victory over Scotland England needed to win by a margin they had managed only once in a century of matches against France and it looked an impossible task after France led 15-7 midway through the first half. Stuart Lancaster's side surged back, however, with score after score to keep their hopes alive, although France, playing their best rugby of the campaign, refused to lie down. When the whistle finally sounded England were left second in the standings for the fourth year in a row and France fourth, in the bottom half of the table for the fourth successive season. "I'm gutted really," Lancaster told the BBC. "It was one of the most courageous performances I've seen from a team. It was an unbelievable game of rugby. "The first two France tries hurt us. But to come back like we did -- it will go down as one of the great games of rugby." England were rocked by conceding two tries in a five-minute spell in the first half by Sebastien Tillous-Bord and Noa Nakaitaci which turned a 7-3 deficit into a 15-7 lead after Ben Youngs had crossed for the hosts after two minutes. England hit back through Anthony Watson and a second for Youngs to lead 27-15 at halftime and the tries continued to flow after the restart as Maxime Mermoz and George Ford each crossed under the posts. Jack Nowell produced a brilliant finish to score again for England but prop Vincent Debaty somehow galloped 70 metres to reply for France after a great break by Nakaitaci. Billy Vunipola bundled over at one end and Benjamin Kayser did the same at the other before Nowell's second took England beyond their previous highest score against France after their 2001 48-19 win and in sight of glory. They pounded the line in a deafening finale but France, who had conceded only two tries in their previous four games, held out, leaving 82,000 England fans breathless, exhilarated and hugely disappointed all at the same time. - REUTERS