England bring back Broad, bat against India in Chennai 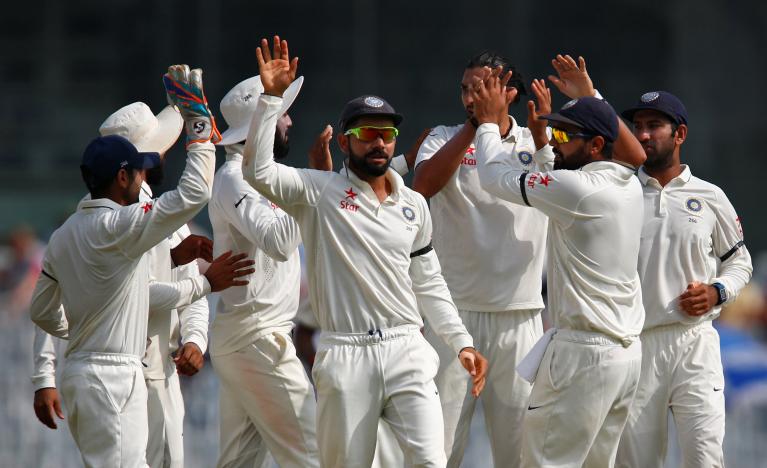 England bring back Broad, bat against India in Chennai

CHENNAI - England captain Alastair Cook won the toss and opted to bat in the fifth and final test against India on Friday as the tourists bid to salvage some pride, having lost the series with a match to spare. England brought back fit-again all-rounder Stuart Broad and gave a test debut to Liam Dawson, while Chris Woakes and James Anderson missed out. "Looks a very good surface, considering what happened in the last week or so," Cook said, referring to the cyclone that lashed the area and prompted groundstaff to use burning coal to dry the track at the MA Chidambaram stadium. "I've never seen a pitch dried with coal, maybe that's going to be the future of pitch preparation," Cook added. Having taken an unassailable 3-0 lead in the series, India captain Virat Kohli was not too perturbed with the toss. "It's not such a bad position to be ... It looks like a good wicket. A bit of dampness from the conditions that have been around for the past few days. I think (this is) the best session for our fast bowlers to bowl," Kohli said. "Winning is a great habit and we created that. It's important to carry on. It's important not to take the foot off the pedal and make sure we put the opposition under constant pressure." India also made two changes, replacing off-spinner Jayant Yadav, who has a thigh niggle, with legspinner Amit Mishra, while Ishant Sharma returned after his wedding to replace fellow paceman Bhuvneshwar Kumar. Teams: India: Murali Vijay, Lokesh Rahul, Cheteshwar Pujara, Virat Kohli (capt), Karun Nair, Parthiv Patel, Ravichandran Ashwin, Ravindra Jadeja, Amit Mishra, Ishant Sharma, Umesh Yadav. England: Alastair Cook (capt), Keaton Jennings, Joe Root, Moeen Ali, Jonny Bairstow, Ben Stokes, Jos Buttler, Liam Dawson, Adil Rashid, Stuart Broad, Jake Ball.