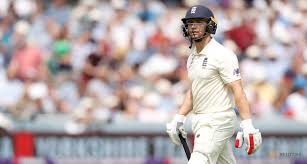 LONDON (Reuters) – England dropped Mark Stoneman and replaced the opening batsman with Keaton Jennings for the second and final test against Pakistan after the hosts were thrashed by nine wickets in the series opener at Lord’s on Sunday. Jennings’ recall is the only change in the 12-man squad for the second test at Headingley, that starts on Friday, which the hosts must win to level the two-match series. Stoneman was clean bowled in both innings at Lord’s, scoring four and nine. The 25-year-old Jennings has played six tests for England, the last of them in August 2017 against South Africa. “Keaton Jennings showed a strong temperament in scoring a hundred on his test match debut against India in December 2016,” national selector Ed Smith said in a statement on Monday. “Keaton has found good form in county cricket this season, including three centuries in his last seven innings (two in the First Division of the County Championship, one in the Royal London One-Day Cup). “Mark Stoneman misses out at Headingley. Mark has experienced a disappointing start to the 2018 season and had a difficult test match at Lord’s.” Fast-bowling all-rounder Chris Woakes was part of the 12-man squad at Lord’s but missed out on selection for the starting XI. Meanwhile, opening batsman Alastair Cook is set to overtake former Australia captain Alan Border as the player with the most consecutive tests with the Headingley match set to be his 154th contest without a break. Squad: Alastair Cook, Keaton Jennings, Joe Root, Dawid Malan, Jonny Bairstow (wicketkeeper), Ben Stokes, Jos Buttler, Dominic Bess, Mark Wood, Stuart Broad, James Anderson, Chris Woakes.