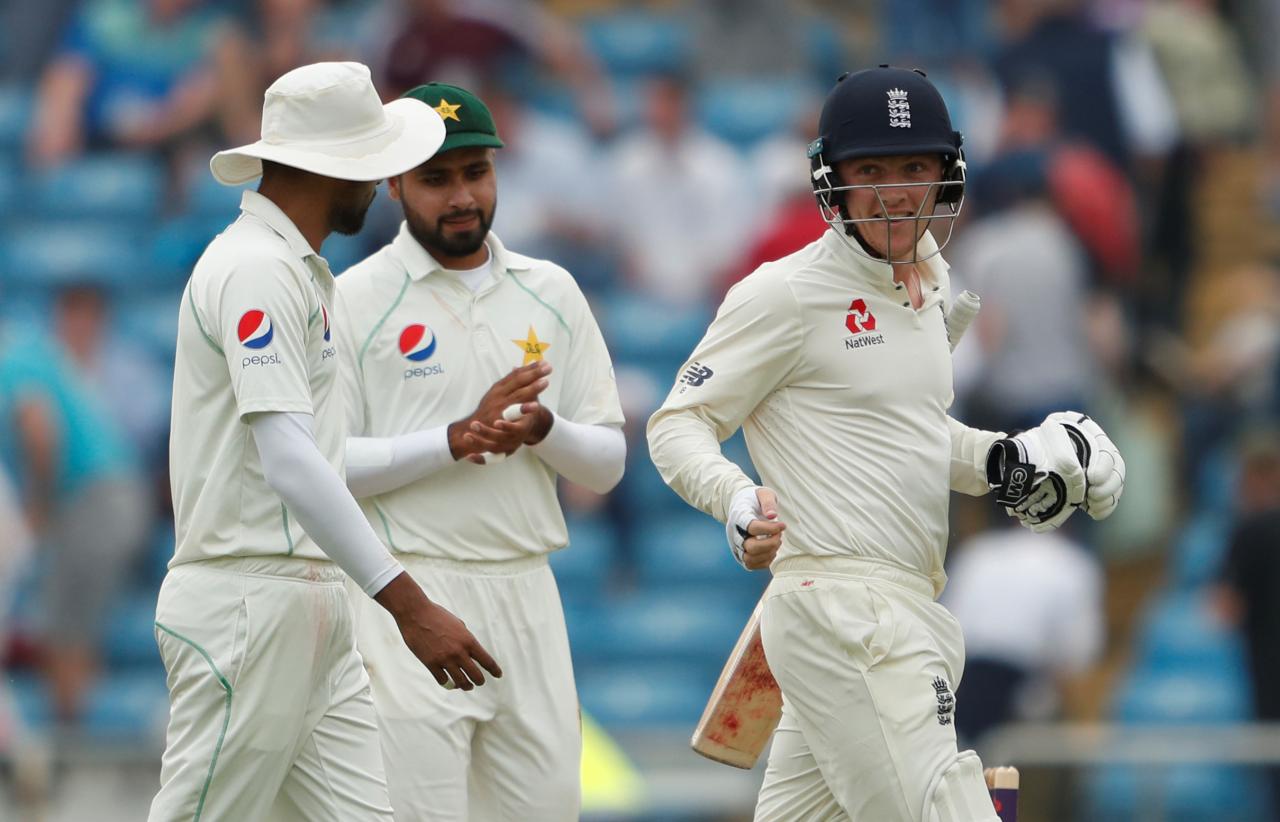 LEEDS (Reuters) - England ended the first day of the second Test against Pakistan at Headingley on Friday in a strong position, bowling out the tourists for 174 before reaching 106 for two by the close. Having lost the first Test at Lords by nine wickets, England trail the second by 68 runs with eight wickets remaining and skipper Joe Root looking well set on 29 not out. Root will have been disappointed however to have lost opener Alastair Cook for 46 late in the final session with the left-hander attempting to pull a short ball from Hasan Ali but gloving the ball to wicket-keeper Sarfraz Ahmed. Keaton Jennings had helped put on a 53-run opening partnership with Cook before getting an outside edge on a delivery from Faheem Ashraf that was snaffled up by Sarfraz. Pakistan were dismissed before tea after Stuart Broad ripped through their upper order with a fine spell that was the perfect answer to critics who have questioned his place in the team. Pakistan, were 79 for seven at one stage and had Shadab Khan to thank for helping them to a more respectable total thanks to a lively 56 and a 43-run ninth wicket partnership with Hasan Ali. After winning the toss in Leeds and opting to bat, Pakistan lost Imam ul-Haq for a duck when he was caught by captain Joe Root at third slip on the last ball of Broad’s first stint following a maiden over from James Anderson. Imam could have gone four balls earlier when he was given lbw but the decision was overturned on review with tracking showing the delivery was going over the stumps. Broad got his second, and 50th Test wicket against Pakistan, when Azhar Ali was trapped lbw to leave Pakistan reeling on 17 for two.

Sam Curran, the 19-year-old replacing injured all-rounder Ben Stokes, had his first bowl in Test cricket before the recalled Chris Woakes removed Haris Sohail (28) with the ball nicked into the hands of Dawid Malan. Pakistan were at 49-3 with Usman Salahuddin making his Test debut at number five, but England chalked up another wicket before the break with Asad Shafiq (27) caught by Cook off Woakes with the score at 62-4. Cook was playing a record 154th consecutive Test, overtaking former Australia captain Alan Border as the player with the most Tests in a row. After lunch, Anderson, finding a fuller length than in the morning, bowled Sarfraz Ahmed and then had Ashraf while Broad picked up his third wicket as he removed Usman Salahuddin lbw. Mohammed Amir was next to go - unwisely chasing a wide Anderson delivery and edging to Johnny Bairstow before the aggressive effort from Shadab and Hasan frustrated England’s attempt to quickly deal with the tail. Shadab’s 56 off 52 balls included 10 fours before he was caught at mid-wicket by Keaton Jennings to give left-arm seamer Curran his maiden Test wicket. Anderson, Broad and Chris Woakes all finished with three wickets. England need a win to avoid a third consecutive Test series defeat, following their loss inside four days at Lord’s. A draw or a win for Pakistan would be the visitors’ first series victory in England for 22 years.