England on top against Windies in humid Grenada 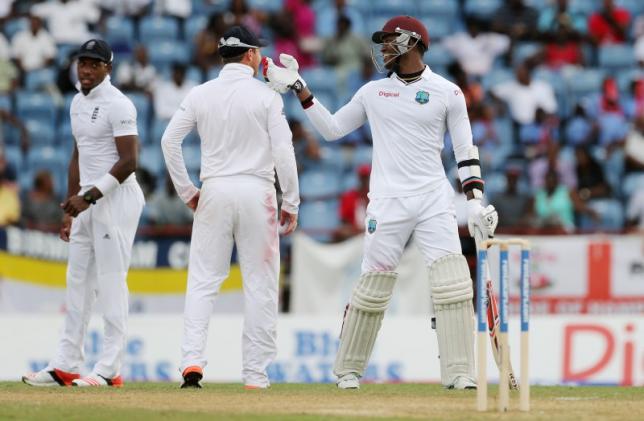 England on top against Windies in humid Grenada

ST GEORGE'S - National Cricket Stadium, St George's - A patient 94 not out from Marlon Samuels helped West Indies recover against England to end the first day of the second test on 188 for five in Grenada on Tuesday. While the tourists will be frustrated at not having made more inroads in the final session before bad light stopped play, West Indies again showed signs of a new-found resilience. New coach Phil Simmons will be pleased to have seen the spirit and focus that helped the hosts battle for a draw on the final of the first test in Antigua evident again as they clawed away from trouble in tricky batting conditions. After overnight and early morning rain, England skipper Alastair Cook won the toss and put the hosts in to bat, hoping that his bowlers could exploit the overcast weather. James Anderson, now England's highest wicket-taker in test cricket, not surprisingly managed to find some swing and removed Kraigg Brathwaite with a superb inswinger for one. Darren Bravo joined local favourite Smith and the pair batted well with England, and particularly seamer Stuart Broad, failing to take full advantage of the favourable bowling conditions. England's Chris Jordan should have had Smith caught when the batsman turned the ball to Gary Ballance at leg-slip but he failed to hold on to the chance. BAD DECISION Three balls later, though, Smith was on his way after he went to drive a full delivery wide outside off stump and was adjudged to have edged it to keeper Jos Buttler. Smith paused for a moment and considered appealing to the video review but opted against turning to technology. He will have regretted that decision after replays showed he hit the ground with his bat and the ball was well clear of his outside edge. After lunch, Bravo, who had batted well for his 35, edged broad to Cook at slip. Cook waited before bringing Ben Stokes into the attack but he provided an instant impact, removing Shivnarine Chanderpaul for one with his second delivery -- the left hander guiding the ball to Moeen Ali at point as the hosts fell to 74 for four. Jamaican Jermaine Blackwood again showed promise by making 26 before, after review, he was ruled to have been trapped leg before off Jordan. The ball continued to swing into the final session but skipper Denesh Ramdin provided the support to Samuels, who batted with disciplined circumspection. With Samuels able to start again in the morning, England will regret their captain dropping the stroke player off Jordan when he was on 33.