England stumble again as Pakistan close in on victory at Lord's 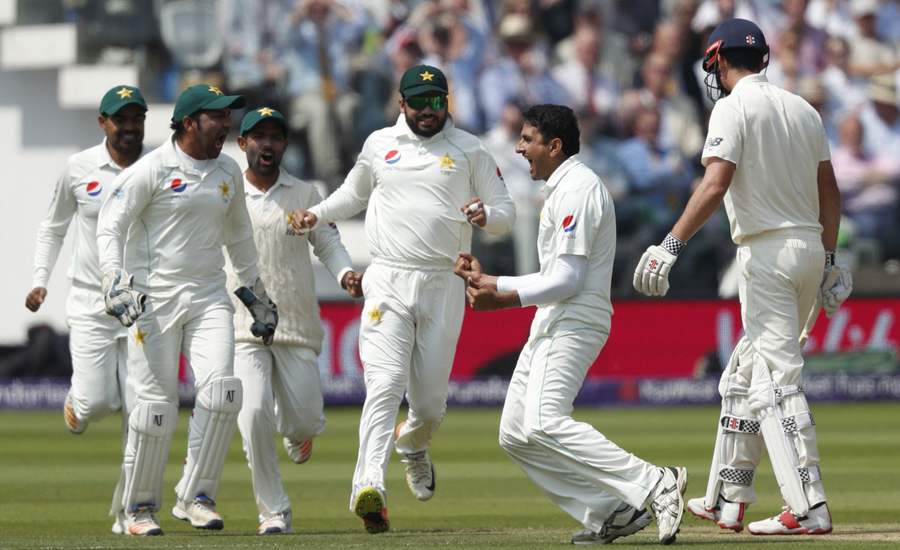 England stumble again as Pakistan close in on victory at Lord's

LONDON – The last time England lost the first Test of a home summer was 1995 when they were defeated by the Windies by nine wickets. That looks to be about to change as Pakistan close in on a brilliant victory as they continued their complete dominance of this match at Lord's. After being bowled out for 363, with Babar Azam unable to resume batting due to injury, they were 179 runs in front on first innings. But for a seventh wicket stand worth 121 from Jos Buttler and debutant Dom Bess the home side would have already lost this game as they struggled with the bat once again. With Pakistan so far in the lead it was vital for England to get off to a strong start with their openers laying a solid platform. That isn’t what the home team got, with Alastair Cook trapped LBW off the bowling of Mohammad Abbas for 1 from the 11th ball of the innings. Cook’s fellow opener, Mark Stoneman, didn’t last too much longer. He was dismissed by a big turning leg break from Shadab Khan that kept low and cannoned into his stumps. With England 31/2 they needed a recovery and that needed to be led by their captain, Joe Root. A solid stand of 60 between Root and Malan looked to be keeping England in the match, with Root by far the most fluent of the two. Malan had contributed just 12 runs to the partnership when he was the next man to go, edging Mohammad Amir through to Sarfraz Ahmed. Pakistan’s captain took a superb catch with the gloves to leave England 91/3. Just two balls later there was more jubilation for Pakistan, and dismay for England, when Amir bowled an absolute beauty that moved just enough into Johnny Bairstow to clip the top off his off stump, and England had slumped to 91/4. With Root still at the crease England would have been thinking there was at least slim hope of them taking this match deep into the fourth day, but he needed support from the other end. When Ben Stokes clipped an innocuous delivery from Shadab into the hands of sub fielder, Fakhar Zaman, it was down to Root and Buttler with England’s long tail starting at number eight. Root once again failed to convert a fifty into a truly match-defining score when he was dismssed LBW by Abbas for 68. It was a decent innings, but his team needed more from him if they were to claw their way back into this Test. With the fall of Root’s wicket England had lost four batsmen for the 19 runs in the space of just 5.5 overs. It was down to Jos Buttler to save England's blushes on his return to the team. Batting with the tail, Buttler made his way to 66* with some excellent support from Dom Bess who finished the day on 55 from 101 balls. Their partnership was the reason that Pakistan will have to bat again, but England are hanging on by a thread. Bess played some absolutely brilliant drives as he made the most of the old ball against tiring Pakistani seamers, but he was playing second fiddle to Buttler who proved that he is far from being a white ball specialist. Without Buttler England would have lost by innings, thanks to him they are only looking at a heavy defeat. Stranger things have happened, but Pakistan should wrap up victory tomorrow. SCOREBOARD