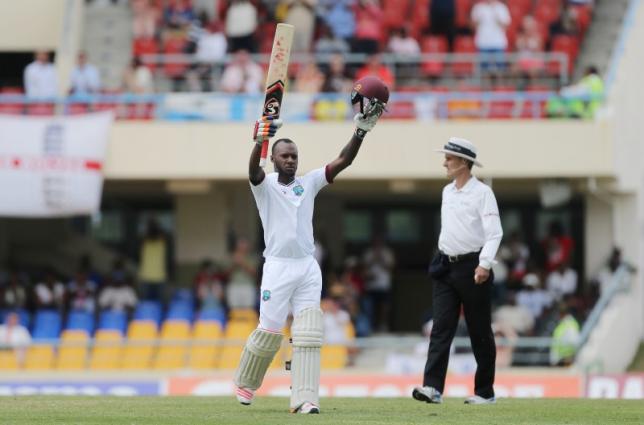 ST PETER'S - England recovered from another top-order batting collapse to lead West Indies by 220 runs on day three of the opening test in Antigua after Jermaine Blackwood had scored his first test century on Wednesday. Replying to England's 399, Blackwood was the mainstay of the West Indies innings, finishing unbeaten on 112 as the hosts were dismissed for 295. England's Jonathan Trott, Alastair Cook and Ian Bell were dismissed cheaply but Gary Ballance (44 not out) and Joe Root (32 not out) took England to 116 for three at the close. The hosts, resuming on 155 for four, lost Shivnarine Chanderpaul -- who passed Mahela Jayawardene's total of 11,814 test runs to climb to seventh on the all-time list -- for 46 when his tentative drive at James Tredwell was pouched by Ben Stokes. Blackwood, reprieved on Tuesday when he was caught in the slips off a no ball, was dropped by Tredwell on 43 before Dinesh Ramdin edged a short Stuart Broad delivery down the leg side to wicketkeeper Jos Buttler. The 23-year-old Blackwood, who made three fifties in his first five tests, played with a discipline and maturity that belied his inexperience but he began to relax with several boundaries including a towering six, his second of the innings. He brought up his hundred with a single but two balls later Tredwell dismissed Jason Holder for 16, caught by Ballance in the covers. Kemar Roach feathered a nick through to Buttler -- his fifth catch of the innings -- before Jerome Taylor was run out for a duck and Sulieman Benn (2) flicked a James Anderson delivery to Root at short leg. Off-spinner Tredwell finished with test-best figures of four for 47 and Anderson claimed two wickets to move within one of Ian Botham's England record of 383 victims. Out for a duck in the first innings, Trott (4) fared little better on his return to the test side for the first time since leaving the 2013-14 Ashes tour due to stress-related issues, edging Jerome Taylor to Ramdin. Cook (13) was caught by Benn at gully off Taylor two overs later and when Bell was run out for 11 England were struggling at 52 for three. Cook, who has not made a test century for nearly two years, will come under further pressure after being axed as England one-day captain in December. But Ballance and Root, both averaging over 50 in test cricket, pushed England's lead beyond 200 with positive running between the wickets and they led the touring side in a strong position at the close. - Reuters