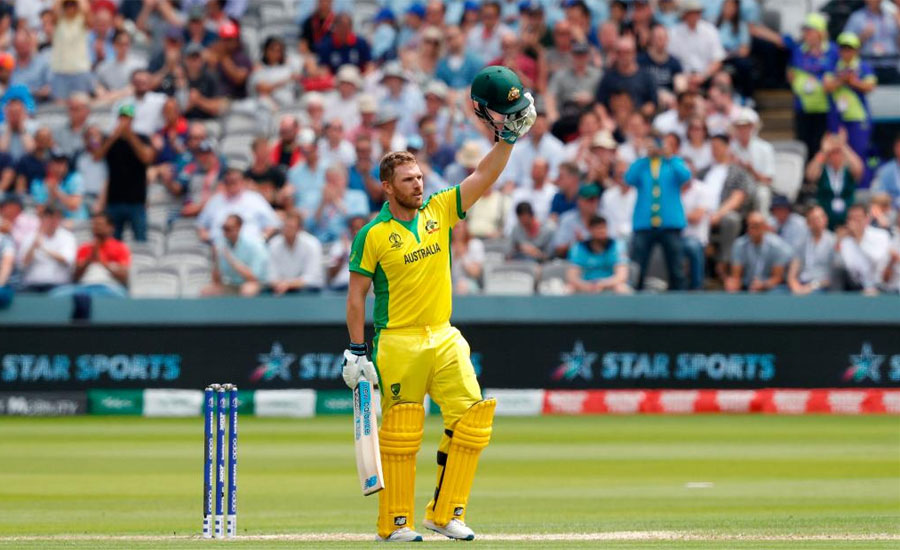 LONDON (Reuters) - England fought back after another solid opening stand between Aaron Finch and David Warner to restrict Australia to 285 for seven in their Cricket World Cup match at Lord’s on Tuesday. Captain Finch and Warner put on 123 runs - their fifth fifty-partnership in a row - before Warner fell, after being put in to bat on a murky morning at the home of cricket. Finch went on to his second century of the tournament. Warner is now the leading batsman in the tournament with 500 runs, just four more than Finch in second place. England, under pressure following their shock loss to Sri Lanka, initially looked nervous in the field. But they bowled tightly in the closing overs to limit the Australians to a manageable score. Finch and Warner appeared to be in complete control before the latter, on 53, spooned a catch to Joe Root at backward point off Moeen Ali. After Ben Stokes had bowled Usman Khawaja for 23, Finch reached three figures off 115 balls. But he skied Jofra Archer’s next delivery straight into the hands of Chris Woakes at fine leg and Australia lost momentum. Glenn Maxwell crunched Archer over mid-wicket for six before edging Mark Wood to wicketkeeper Jos Buttler for 12, and Marcus Stoinis was run out for eight following a comical mix-up with Steve Smith. The former Australia captain made 38 before chipping Woakes to Archer at mid-on, and he left the field to a smattering of boos in reference to his role in last year’s ball-tampering scandal. Pat Cummins edged Woakes to Buttler for one and although Alex Carey pierced the field with a few crisp strokes to finish unbeaten on 38, the Australians may be disappointed with their score as they bid for a sixth win of the tournament. An Australian victory would virtually secure their place in the semi-finals, and if England lose they might need to beat India and New Zealand in their last two group games to be sure of making the last four.