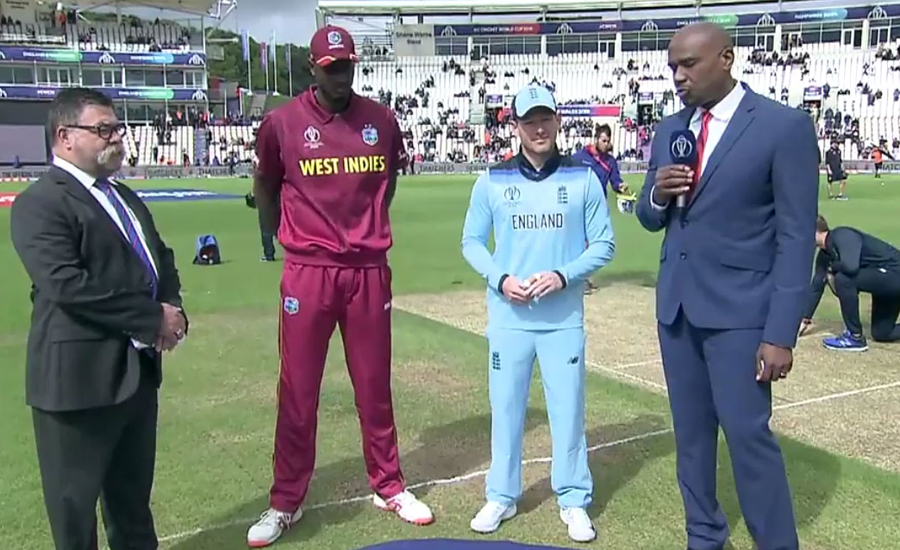 HAMPSHIRE (92 News) – England won the toss and elected to field first against West Indies in the nineteenth ODI of the ICC Men’s Cricket World Cup 2019. After a convincing 106-run victory over Bangladesh, England will be up against a vibrant West Indies unit in their fourth match of the ICC Men's Cricket World Cup 2019. After a shocking defeat to Pakistan, England aced every department against Bangladesh, as they first put up 386/6 on board and then bundled them out for 280 in the 49th over. The openers, determined not to fall into the trap of spin bowling, gave a perfect start, as Jason Roy stroked his way to 153. While Stokes has been giving some priceless overs with the ball, Moeen Ali is likely to return in the playing eleven, considering the number of left handers in the West Indies line-up. On the other hand, the West Indies' bowlers might have lit up the tournament so far but it was the lack of application on the batting front that cost them the game against Australia. Their pacers started well against South Africa too, with Sheldon Cottrell picking up two early wickets, before no further play was possible due to rain interruption. The batsmen will have to step up, to set it up for their bowlers who will be challenged by the never-ending English batting line-up. Once their very own, now their adversary, Jofra Archer will look to defy Chris Gayle and others, promising an exciting contest within a contest at the Hampshire Bowl on Friday-ICC Key Players Eoin Morgan (England): The England captain is yet to produce an innings that would match his stature in the tournament so far. Morgan, who averages 76.25 at the Hampshire Bowl and was the highest run-scorer for England in the ODI series against West Indies earlier this year, might be the biggest threat to his opponents on Friday. Chris Gayle (West Indies): Chris Gayle had lit up the tournament with a power-packed 50 against Pakistan but could last only till the fifth over against Australia. The Universe Boss relishes batting against England averaging 51.42 against the hosts, contrary to his career average of 38.14 and will look to stamp his authority early on in the innings. Conditions It would be a cloudy start to the day which would assist the fast bowlers early on, tempting the captains to field first. The afternoon will see rain becoming a bit showery with some brighter spells developing later. Squads England: Eoin Morgan (c), Moeen Ali, Jofra Archer, Jonny Bairstow, Jos Buttler (wk), Tom Curran, Liam Dawson, Liam Plunkett, Adil Rashid, Joe Root, Jason Roy, Ben Stokes, James Vince, Chris Woakes, Mark Wood. West Indies: Jason Holder (c), Fabian Allen, Darren Bravo, Shannon Gabriel, Shimron Hetmyer, Evin Lewis, Nicholas Pooran, Andre Russell, Carlos Brathwaite, Sheldon Cottrell, Chris Gayle, Shai Hope, Ashley Nurse, Kemar Roach, Oshane Thomas.