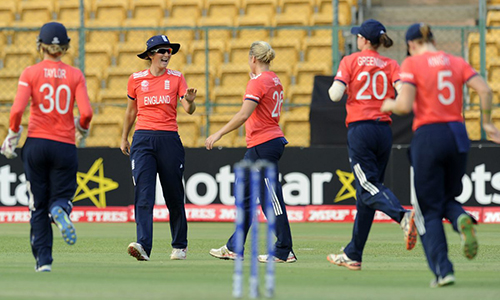 BANGALORE – In the pre-match press conference, Charlotte Edwards, England Women captain, mentioned how she would bring experience to a fairly young and explosive batting line-up. Her words were reflected in her innings in the team’s opening match against Bangladesh Women at the M Chinnaswamy Stadium in Bangalore on Thursday, ICC reported. While her teammates struggled, Edwards looked at ease against a re-energised Bangladesh as she scored a gritty half-century in her team’s 36-run win. Her 47-run partnership with Natalie Sciver laid a solid platform for England to finish on 153 for 7, before the bowlers combined to restrict Bangladesh to 117 for 5. England, known for taking a bit of time at the start of the innings, led by Tammy Beaumont, started the day with real intent after having won the toss. The opener used her feet to the pacers and spinners alike, finding the gaps beautifully. She sent a Salma Khatun delivery over the rope for the first six of the match, before she was castled by Jahanara Alam for 18. Sarah Taylor, England’s superstar wicketkeeper, walked in and looked edgy from the start. She was looking to assert herself, but Bangladesh managed to keep things tight, denying her a single boundary. Frustrated, she danced down the pitch and completely missed a delivery from Fahima Khatun, the legspinner, and was stumped for a 15-ball 9. England's 70 for 2 became 71 for 3 when Heather Knight was caught and bowled by Khadija Tul Kubra. Exuberant celebrations followed, and it was clear that Bangladesh were charged up. Sciver and Edwards joined hands to settle the innings. They milked the bowlers, picking up singles, but the boundaries were hard to come by. Edwards used her feet beautifully to the spinners, using her bottom hand to great effect to find the gaps on the leg side. She brought up her half-century in 41 balls, but it was clear that she was struggling between the wickets. Bangladesh, who were rather energetic until then, seemed to be feeling the heat too. Sciver and Edwards were dropped off consecutive deliveries off the bowling of Salma, before the former's luck ran out and she was caught at long on for 27. Edwards was the next to go for 60, giving Sultana her second stumping. With England 127 for 5 in 18 overs, Danielle Wyatt and Katherine Brunt provided the final push. They hit with power and were seriously quick between the wickets, pushing the fielders on the boundary. The pair were dismissed off the last two balls of the innings to Alam, but their knocks of 15 and 17 respectively propelled England to 153 for 7. Alam, Bangladesh’s best bowler, finished with figures of 3 for 32. Brunt and Anya Shrubsole derailed Bangladesh’s chase within the first quarter of the innings, reducing them to 14 for 2. Sharmin Akhter was the first to go when she was castled by an inswinger from Brunt for a duck. Ayasha Rahman, her partner, fell for 2, caught by Edwards at mid-off off Shrubsole. Rumana and Fargana Hoque tried to bat positively in the middle. Their shot selection was impressive, as they chose to hit through the ball rather than across the line. After drilling Danielle Hazell over mid-off for four, Hoque, on 19, smashed a pull shot straight to Sciver at midwicket. Rumana soon followed when she was run out by a direct throw from Edwards, also for 19. At 46 for 4 in the 11th over, an England victory seemed a formality, but Salma and Sultana kept the crowd entertained with some wonderful strokeplay. Salma was particularly impressive with her cover drives and flick shots, while Sultana preferred the sweep shot and nudges behind point. The experience of Salma, who scored an unbeaten 30-ball 32, and the energy of Sultana, 35 in 28 balls, including a straight six of Shrubsole, allowed Bangladesh to fight its way to 117 for 6, 36 runs short of the target. The duo shared an impressive 64-run partnership in 49 balls. Shrubsole finished with figures of 2 for 27 as England’s best bowler.