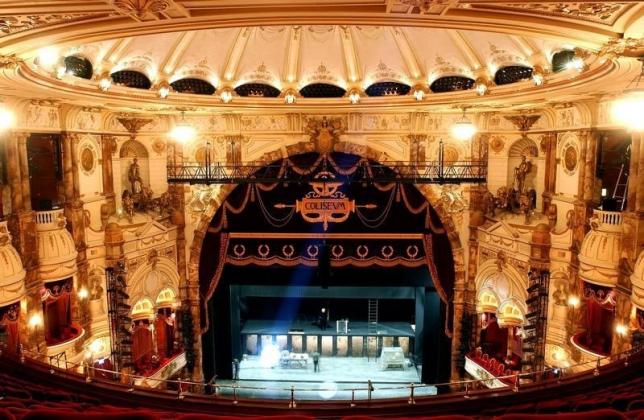 LONDON - London's troubled English National Opera (ENO) is turning to some old favorites and past successes for its new season in an effort to fill its huge, central London theater and ease its financial problems. A new production of Shostakovich's ribald "Lady Macbeth of Mtsensk" will open the 2015-2016 program, which was unveiled on Wednesday, with surefire crowd pleasers such as Puccini's "La Boheme" and Mozart's "The Magic Flute" also in the line-up. The ENO, whose chairman quit in December in a row over finances with artistic director John Berry, and whose executive director left a month later, received a blow in February when it was stripped of regular government funding. Instead, the Arts Council England offered it "special funding arrangements" until it gets its finances in order. To help fill its cavernous Coliseum theater, the ENO said would make more than 60,000 seats available for 20 pounds ($30) or under in the forthcoming season, which will feature six new stagings and five revivals. "It is vital to ENO’s mission that our world-class program is accessible to the widest possible audience," said Cressida Pollock, the company's Interim CEO brought in from management consultancy McKinsey & Company to help balance the books. "We recognize that we must bring new audiences into the London Coliseum, and ensure they return time and time again by offering an experience like no other, at an affordable price." Season opener "Lady Macbeth", which Stalin famously banned in 1936 after walking out before the final scene at a performance in Moscow, was a hit for the ENO, which performs operas translated into English, in a much praised 1987 production by David Pountney. The new production will be staged by Russian theater director Dmitri Tcherniakov, with the ENO's new music director Mark Wigglesworth, who is taking over from Edward Gardner, conducting, the ENO announced. The ENO will also mount a new production of Wagner's "Tristan and Isolde" directed by Daniel Kramer with sets by British-Indian sculptor Anish Kapoor and with Stuart Skelton and Heidi Melton in the title roles. Other new productions are Philip Glass's "Akhnaten", Bellini's "Norma" and Verdi's "The Force of Destiny". The Verdi will be directed by the radical Spanish director Calixto Bieito in a co-production with the Metropolitan Opera in New York. Other revivals include Rossini's "The Barber of Seville", Gilbert & Sullivan's "The Mikado", Puccini's "Madam Butterfly" and Janacek's "Jenufa". - Reuters