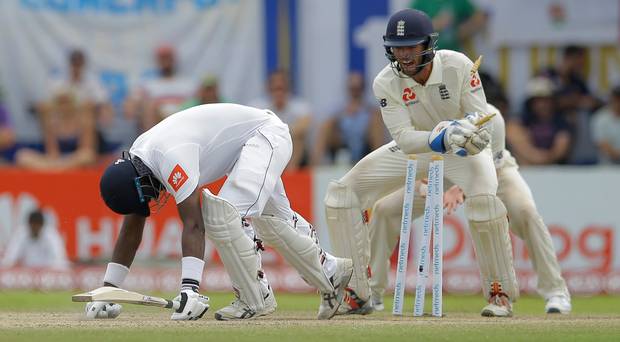 COLOMBO (Reuters) - A century on debut and tidy performance behind the stumps has ensured that Ben Foakes will retain the wicketkeeper’s position for the second Test against Sri Lanka, captain Joe Root has said. With Jonny Bairstow nursing an ankle injury, Foakes stepped into the role in the first test and seized his opportunity with a man-of-the-match performance, scoring 107 in his debut innings. England won the match at Galle by 211 runs, with Foakes’s first innings knock crucial after they had slumped to 103 for five on the first day. The wicketkeeper was last man out, having combined with the lower middle order and bowlers for an additional 239 runs. “Ben is going to keep,” Root said in comments published by The Independent ahead of the second test in Pallekele starting on Wednesday. “We’ve come to Sri Lanka to win this tour. And in these conditions, I think Ben is the best option behind the stumps. “It’s a great opportunity for Ben to show his ability and I think you’ve got to reward a performance like last week.” Bairstow has returned to training but Root did not say whether he would have been available. British media have reported that he did not take part in any activities that could have aggravated the ankle injury. Root said his Yorkshire team mate Bairstow, who has strengthened England’s lower-middle order with his batting and worked hard on his wicketkeeping, still had a role to play in the test side. “Jonny is a fine keeper and what he’s done over the last couple of years has been exceptional,” Root added. “He’s pretty much been faultless, not really stood out at all, which is probably a good thing for a wicketkeeper, and long-term I see him as a focal part of the test team.” Fellow wicketkeeper Jos Buttler is likely to move up the order to bat at number three after Moeen Ali failed to take his opportunity in Galle, being dismissed for a golden duck in the first innings and scoring just three in the second. “I’ll bat where is required,” the free-scoring Buttler told British media about a potential elevation to the top order. “In this part of the world it doesn’t matter too much. “The style of cricket required is very similar wherever you bat with a 90 percent chance of starting your innings against spin. “Potentially number three could be the best time to bat.”