ISLAMABAD (92 News) – Federal Minister for Interior fired back after criticism from US President Donald Trump’s tirade against Pakistan and said that Pakistan fought the world's biggest war against terrorism on its soil, mentioning, “We have rendered great sacrifices. Enough, now it’s your turn.” Addressing at Islamabad Chamber of Commerce (ICCI) on Monday, the interior minister hit back Trump’s allegations against Pakistan and said, “This is Naya Pakistan now the term of “do more” will not work. Do more story has become very old. Pakistan have done many things and rendered great services in war on terror.” Speaking to the newly elected heads of ICCI, Shehrayr explained that everyone will run together in Naya Pakistan. He said that the former prime ministers only promoted their relatives including their brothers and sons but it would not be practiced now. The interior minister said that the people become frustrated when the rulers prefer to their personal interests. “No one is allowed to make new state within the state on the name of religion or sectarianism,” he warned. He also assured that the state is responsible for the security of peoples’ life and money. He reiterated that the murderer, including all the culprits involved in the murder, of martyred SP tahir Khan Dawar would arrested. On the other hand, Minister for Human Rights Shireen Mazari also strongly responded to US President Donald Trump’s recent statement that Pakistan does not do “a damn thing” for the US. 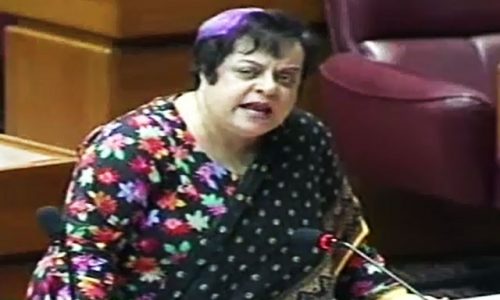 In a tweet, Mazari said Trump’s statement should be a lesson for those Pakistani leaders who kept appeasing the US especially after September 11. Mazari went on to give examples of the appeasement such as the loss of Pakistani lives in the US war on terror, free space to Raymond Davis and other operatives and illegal killings by drone attacks.

Trump's tirade against Pak & his claim that that Pak does not do "a damn thing" for the US shd be a lesson for those Pak ldrs who kept appeasing the US esp after 9/11! The renditions; the loss of Pak lives in US WoT; the free space for Raymond Davis & other operatives; etc etc

“Also, whether China or Iran, US policies on containment and isolation do not coincide with Pakistan’s strategic interests,” she added.

The illegal killings by drone attacks; the list is endless but once again history shows appeasement does not work. Also, whether China or Iran, US policies of containment & isolation do not coincide with Pak strategic interests. https://t.co/tFBe9BentG

In a recent interview – Ignoring Pakistan’s sacrifices in the war against terrorism – US President Donald Trump defended his administration’s decision to stop hundreds of millions of dollars in military aid to Pakistan and said the country did not do ‘a damn thing’ for the US and its government had helped Al Qaeda leader Osama bin Laden hide near its garrison city. Referring to Laden and his former compound in Abbottabad, Pakistan, Trump in an interview to Fox News said, “You know, living think of this living in Pakistan, beautifully in Pakistan in what I guess they considered a nice mansion, I don’t know, I’ve seen nicer.” The compound was demolished shortly after US Naval Special Warfare Development Group forces, in a daring helicopter raid, killed Laden there in 2011. “But living in Pakistan right next to the military academy, everybody in Pakistan knew he was there,” he added. “And we give Pakistan USD 1.3 billion a year. … (Laden] lived in Pakistan, we’re supporting Pakistan, we’re giving them USD 1.3 billion a year — which we don’t give them anymore, by the way, I ended it because they don’t do anything for us, they don’t do a damn thing for us,” he said. The ties between the two countries strained after Trump, while announcing his Afghanistan and South Asia policy in August last year, hit out at Pakistan for providing safe havens to “agents of chaos” that kill Americans in Afghanistan and warned Islamabad that it has “much to lose” by harbouring terrorists. In September, the Trump administration cancelled USD 300 million in military aid to Islamabad for not doing enough against terror groups active on its soil.