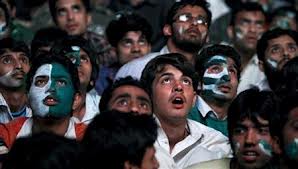 LAHORE (92 News) - Enthusiastic cricket fans glued to television sets during the World Cup thriller between India and Pakistan at Australia's Adelaide Oval on Sunday. All the roads and markets gave a deserted look during the match. Big screens had been installed in different cities. The fans gathered in streets to watch the match.