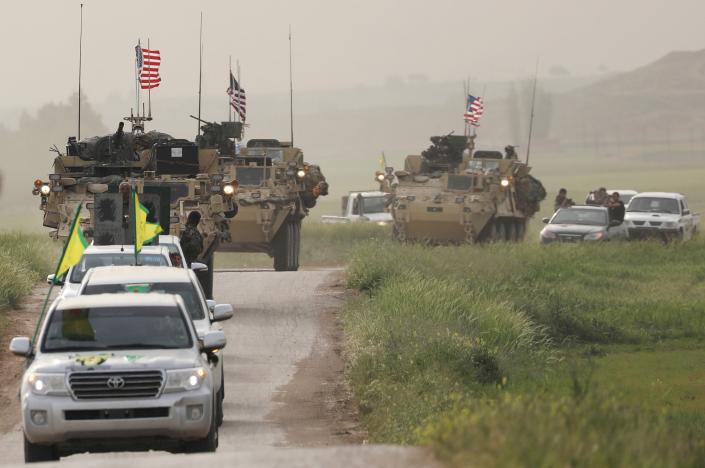 ISTANBUL - President Tayyip Erdogan said on Friday his visit to the United States next week could mark a "new beginning" in relations between the NATO allies which were shaken by a US decision to arm Kurdish YPG fighters in Syria.

Erdogan repeated Ankara's criticism of President Donald Trump's decision, saying it ran counter to the two countries' strategic interests - but also sought to portray it as a relic of the Obama administration's Middle East policy.

"The United States is still going through a transition period. And we have to be more careful and sensitive," he told a news conference at the Ankara airport before departing for China and the United States, where he will meet Trump for the first time since the president's January inauguration.

"Right now there are certain moves in the United States coming from the past, such as the weapons assistance to the YPG," Erdogan said. "These are developments that are in contradiction to our strategic relations with the United States and of course we don't want this to happen."

Turkey considers the YPG an extension of the outlawed PKK, which has fought an insurgency in its southeast region for three decades and is designated a terrorist group by Turkey, the European Union and United States.

Erdogan said he did not want to see "a terrorist organisation alongside the United States", and that Turkey would continue military operations against Kurdish militia targets in Iraq and Syria.

He also said he would pursue "to the end" Turkey's demand for the extradition of the US-based Islamic cleric Fethullah Gulen who Ankara says was behind a failed military coup last July. That was followed by a purge of tens of thousands of Turkish state employees accused of links to Gulen, who has denied any involvement in the coup attempt.

But the tone of Erdogan's comments, four days before he is due in Washington to meet Trump, contrasted with angry rebukes from Ankara earlier this week, when the foreign minister said every weapon sent to the YPG was a threat to Turkey and the defence minister described the move as a crisis.

Erdogan, who had a fraught relationship with former President Barack Obama, said his meeting with Trump at the White House next week would be decisive. "I actually see this US visit as a new beginning in our ties," he said.

Trump's Defense Secretary Jim Mattis said after talks in London on Thursday with Turkish Prime Minister Binali Yildirim that he had no doubt the two countries could work through the tensions caused by the decision to arm the YPG.

A US official also told Reuters that the United States was looking to boost intelligence cooperation with Turkey to support its fight against the PKK.

Asked about US pledges of support, Erdogan suggested he will seek further guarantees when he meets Trump. "Among the information we have received, there is some that satisfy us and others that are not sufficient," he said. -Reuters