Erdogan targets more than 50,000 in purge after failed Turkish coup 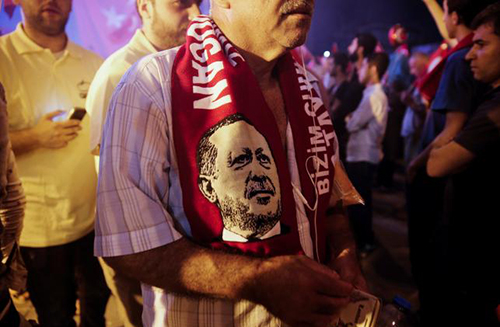 Erdogan targets more than 50,000 in purge after failed Turkish coup

ISTANBUL/ANKARA  – Turkey vowed to root out allies of the US-based cleric it blames for an abortive coup last week, widening a purge of the army, police and judiciary on Tuesday to universities and schools, the intelligence agency and religious authorities. Around 50,000 soldiers, police, judges, civil servants and teachers have been suspended or detained since the coup attempt, stirring tensions across the country of 80 million which borders Syria's chaos and is a Western ally against Islamic State. "This parallel terrorist organization will no longer be an effective pawn for any country," Prime Minister Binali Yildirim said, referring to what the government has long alleged is a state within a state controlled by followers of Fethullah Gulen. "We will dig them up by their roots," he told parliament. A spokesman for President Tayyip Erdogan said the government was preparing a formal request to the United States for the extradition of Gulen, who Turkey says orchestrated the failed military takeover on Friday in which at least 232 people were killed. U.S. President Barack Obama discussed the status of Gulen in a telephone call with Erdogan on Tuesday, the White House said, urging Ankara to show restraint as it pursues those responsible for the coup attempt. In parallel talks, US Defense Secretary Ash Carter and his Turkish counterpart discussed the importance of Turkey's Incirlik Air Base in the campaign against Islamic State in Syria and Iraq, the Pentagon said. The base, which is used by Turkish and US forces in the air campaign against Islamic State, has been without power in the days since the failed coup. Seventy-five-year-old Gulen, who lives in self-imposed exile in Pennsylvania but has a network of supporters within Turkey, has condemned the abortive coup and denied any role in it. A former ally-turned critic of Erdogan, he suggested the president staged it as an excuse for a crackdown after a steady accumulation of control during 14 years in power. On Tuesday, authorities shut down media outlets deemed to be supportive of the cleric and said 15,000 people had been suspended from the education ministry along with 100 intelligence officials. A further 492 people were removed from duty at the Religious Affairs Directorate, 257 at the prime minister's office and 300 at the energy ministry. The lira weakened to beyond 3 to the dollar after state broadcaster TRT said all university deans had been ordered to resign, recalling the sorts of broad purges seen in the wake of successful military coups of the past. In a sign of international concern, a German official said a serious fissure had opened in Turkey and he feared fighting would break out within Germany's large Turkish community. "A deep split is emerging in Turkish society," Bavarian Interior Minister Joachim Herrmann told the Berliner Zeitung newspaper. "The danger of an escalation in violence between Erdogan supporters and opponents has also risen in Germany." –REUTERS