Erdogan vows to rid Turkey of 'virus' behind failed coup as 6,000 arrested

Erdogan vows to rid Turkey of 'virus' behind failed coup as 6,000 arrested

ANKARA (92 News) – Turkish President Erdogan has on Monday vowed to purge state bodies of the "virus" that caused the revolt as Turkey has arrested 6,000 people after a failed coup. Speaking at a funeral in Istanbul, Erdogan vowed to “clean all state institutions of the virus” of Fethullah Gülen supporters. Members of what he called the “Gülen group” have “ruined” the armed forces, he said, and are being arrested in all ranks within the army. Erdogan's top military aide Col Ali Yazici is among those now in custody. 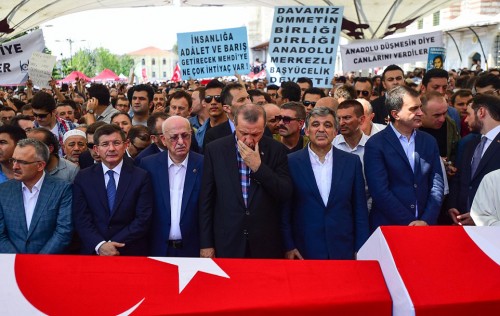 Erdogan further said that Turkey would request the extradition of Gülen, who has been given sanctuary in the American state of Pennsylvania, and his backers. A Turkish foreign ministry spokesman said more than 290 people, including “more than 100 coup plotters” had been killed and 1,400 wounded. Erdogan also said Turkey could consider reinstating the death penalty following the putsch bid, despite concerns in the international community. The country's president was overcome with grief at the funeral of his friend Erol Olcak and his 16-year-old son, who were shot dead on the Bosphorus bridge while protesting against the coup. But Erdogan's political rivals claim it was the leader himself who staged the takeover to further tighten his grip on power, an accusation he denies. 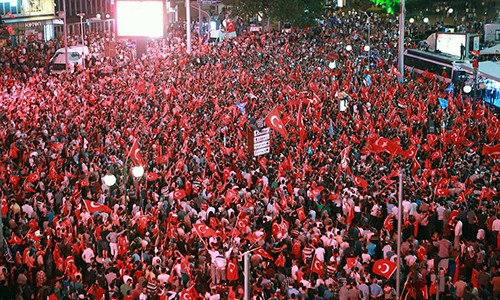 The mass funeral was held for civilians who died on Bosphorus Bridge in Istanbul, including İlhan Varank, the brother of Erdogan's chief supervisor. He was a professor of computer science and was shot according to Turkish media. On the other hand, Several thousand people came out to Istanbul’s central Taksim Square, celebrating the end of the attempted military coup that took the country and the rest of the world by surprise the day before. People were seen walking down the streets, cheering and carrying national flags. Women and children also attended the celebrations. Ruptly’s video from Taksim Square shows people singing, clapping and chanting. At another point, music was heard, as people lit up fireworks. 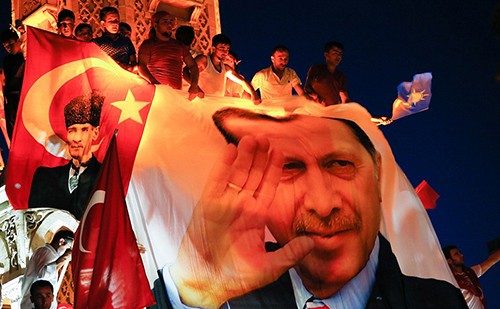