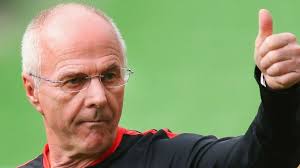 HONG KONG (Reuters) - Former England manager Sven-Goran Eriksson has turned down an offer to take charge of the Iraq national team, a source at the Iraq Football Association (IFA) has told Reuters.
Eriksson had been approached to lead the Gulf nation to the Asian Cup finals in the United Arab Emirates early next year but had rejected the contract offer put forward by the IFA, the source said. Iraq, who won the Asian Cup in 2007, have been drawn to face Iran, Vietnam and Yemen in the group phase of the competition, which kicks off on Jan. 5. The Iraqis failed to qualify for the World Cup finals in Russia and were most recently coached by Basim Qasim, who represented the country during their only appearance at the tournament in 1986.