EU commissioner suggests broad cuts to tariffs with US 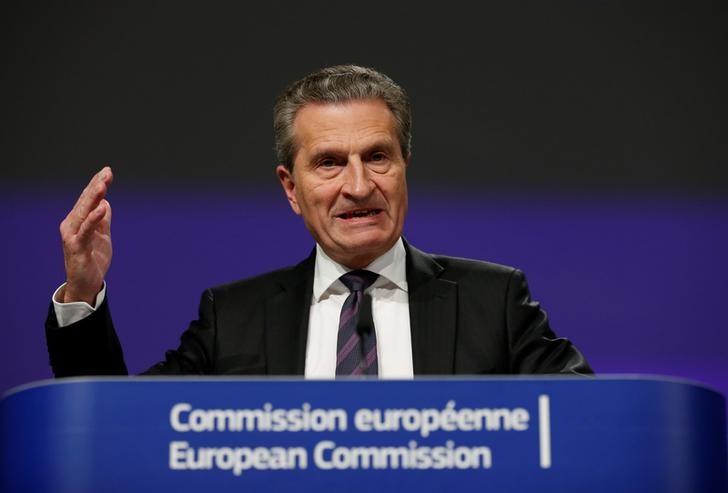 EU commissioner suggests broad cuts to tariffs with US

BERLIN (Reuters) - The European Union’s budget commissioner suggested on Wednesday the bloc would be ready to discuss mutual tariff cuts with the United States across a range of products, provided Washington lifts recent punitive tariffs first. Speaking before an EU delegation travels to Washington for talks on Wednesday on a long-term trade deal, Guenther Oettinger said the EU wanted the United States to first drop its new tariffs on aluminum and steel imports. “Firstly, our common line is that we expect the existing punitive tariffs to be lifted,” Oettinger, a German, said of the EU’s position. “Then we are ready to discuss a reduction and restructuring of all tariffs in all sectors.” “In this way, we want to avoid a further escalation of the trade conflict, and to avoid a trade war,” he told broadcaster Deutschlandfunk. “One could try to untangle the existing tariffs and then ... reduce tariffs for various goods and services.” “That would be a negotiation that would be possible in half a year, and which we could start with the US in the autumn.” Oettinger suggested the EU and the United States could try to negotiate a lighter version of a stalled comprehensive US-European trade deal known as the Transatlantic Trade and Investment Partnership (TTIP). “One could try for a TTIP light,” he said. European Commission President Jean-Claude Juncker travels to Washington on Wednesday for talks focused on trade tensions after the US imposition of tariffs on EU steel and aluminum and US President Donald Trump’s threats to extend those measures to European cars. On Monday, the Commission said Juncker would not arrive in the United States for the talks with Trump with a specific trade offer. “Anything would be better than a trade war,” said Oettinger. Trump has repeatedly complained about the European Union, pointing to the higher duties it applies for car imports and describing the bloc as a “foe” in trade. EU officials have said that, while EU import duties for cars are heavier than those of the United States, for other products, such as trucks, US rates are higher. European Trade Commissioner Cecilia Malmstrom, who will accompany Juncker, said last week that the EU was preparing a list of US products to hit if the United States imposed tariffs on EU cars.