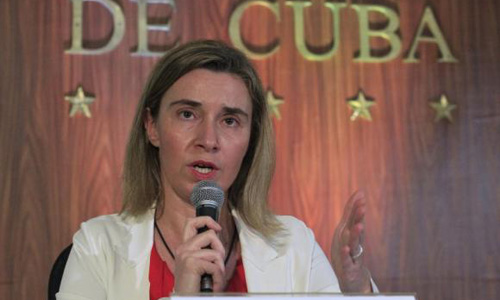 HAVANA - The European Union and Cuba agreed to speed up the pace of talks on improving bilateral relations, hoping to reach the basics of a deal by the end of 2015, EU foreign policy chief Federica Mogherini said on Tuesday. The EU and Cuba began negotiations in April last year to rewrite their bilateral political agreement, part of a deepening of ties since the 28-nation bloc lifted diplomatic sanctions in 2008. But they only managed three meeting in 11 months, prompting the Europeans to suggest a quicker pace, which the Cubans agreed to, Mogherini told reporters in Havana after meeting with Cuban President Raul Castro and other high-ranking officials. She called the pace of progress "slow" but said it was gaining "political momentum." "We decided today to speed up the rhythm of our negotiations, hopefully to manage to finalize the framework of our dialogue and agreement by the end of this year," Mogherini told reporters. Cuban Foreign Minister Bruno Rodriguez is due to visit Mogherini in Brussels on April 22. Like Mogherini's trip to Havana, that meeting will fall outside of formal negotiations. Between now and then they will also see each other at the Summit of the Americas set for April 10-11 in Panama, to which both Cuba and the EU are invited for the first time. In addition, Cuban officials will attend a summit of European and Latin American leaders scheduled for June in Brussels. With so many chances to talk inside and outside the formal negotiations, European officials said they were hopeful of a deal by year-end, though Cuba had not committed to that goal. Mogherini declined to assess blame for the pace, attributing part of the delay to her taking office in November. In the meantime Cuba began its sudden engagement with the United States, as the former adversaries announced in December they would restore diplomatic relations. The United States and Cuba quickly arranged high-level meetings in Havana and Washington, while EU-Cuba talks were postponed twice. Though not as severe as the open conflict between the United States and Cuba, Europe's relations with the Caribbean island have been strained through the years. A year ago the EU agreed to replace its Cuba policy known as the common position, which placed a priority on democratic reforms and improved human rights in Cuba. - REUTERS