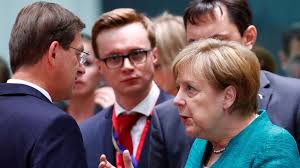 BRUSSELS (Reuters) - European Union leaders reached an agreement on migration after almost 10 hours of chaotic talks in Brussels over the sensitive issue threatening their union and zone of free travel, as well as German Chancellor Angela Merkel’s government.
“EU28 leaders have agreed on (summit) conclusions, including on migration,” the chairman of the talks, Donald Tusk, said. Italy has earlier blocked any agreement at the summit - which was also about trade and security, among other things - unless EU peers meet its demands over migration.