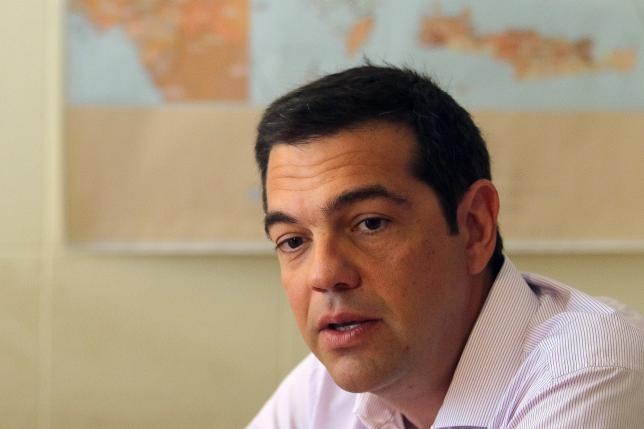 BRUSSELS/ATHENS - Greece is on track to complete a draft deal on a third bailout by Tuesday and possibly get a first disbursement by Aug. 20 to meet a key payment, sources familiar with a conference call of senior EU finance officials late on Friday said. Athens is negotiating with European Union institutions and the International Monetary Fund for up to 86 billion euros ($94 billion) in fresh loans to stave off economic collapse and stay in the euro zone. Senior EU officials assessed the progress in talks between Athens and its international creditors, with Germany warning against haste. Greek Prime Minister Alexis Tsipras has tried to force the pace of the talks, keen to wrap up agreement on sensitive economic reforms by mid-August, while many Greeks are on holiday, and receive an initial aid disbursement by Aug. 20 in time to make a bond payment to the European Central Bank. The view of EU officials was that talks are proceeding smoothly and may be completed over the weekend, one source said. If a draft memorandum of understanding and an updated debt sustainability analysis are ready as planned on Tuesday, the Greek government and parliament would be expected to approve them by Thursday. This would open the way for euro zone finance ministers to meet or hold a teleconference on Friday to endorse the up to 86 billion euro three-year loan programme for Athens. Greece would be expected to enact another package of reform legislation before Aug. 20, in parallel with national ratification procedures to receive a first aid payment in time to meet the ECB payment. "Everyone is working on Plan A - a deal with disbursement by Aug. 20," the source said. Negotiations began on July 20, a week after euro zone leaders agreed at an acrimonious all-night summit on stringent conditions for opening talks with Greece on a third bailout to save it from bankruptcy and keep it in the euro zone. The source said no major differences had emerged among creditor nations on the one-hour call of the Economic and Financial Committee of deputy finance ministers, partly because there was nothing immediate to decide. Some countries, led by Germany, were keen to nail down more specific long-term reform commitments in addition to the immediate actions to be implemented, the source added. Tsipras and French President Francois Hollande agreed at a meeting on Thursday that a new deal should be concluded soon after Aug. 15. "The objective is for the negotiations on the programme ... to be concluded at the end of August. We know it’s difficult but we must make sure that the conditions are met, in a good spirit," Hollande told reporters. Talks were going "in the best of directions," he added. The European Commission also has said talks are moving "in a satisfactory way" and is keen to wrap them up soon, not least because of the political sensitivity of arranging another bridge loan for Athens if a deal is not ready in time. Earlier on Friday, commission spokeswoman Mina Andreeva said negotiations had begun on drafting a memorandum of understanding on a loan agreement. Germany, keen on fiscal discipline and far-reaching economic reforms, is sceptical of any early deal and doubts a multi-billion-euro bailout can be agreed by mid-August. "It remains completely open," said one politician from the ruling coalition government, adding that Finance Minister Wolfgang Schaeuble was taking a cautious view of comments by commission chief Jean-Claude Juncker on the chances of a deal. Greece would not get a free ticket to new aid, the coalition politician added. The Sueddeutsche Zeitung said the German Finance Ministry favoured another bridge loan to give Greece and its creditors time to negotiate a comprehensive reform programme. The ministry says a range of issues remain to be settled, "especially around future conditionality," including macroeconomic and budget targets. That appeared to reflect Schaeuble's scepticism about whether Greece is fit to remain in the 19-nation monetary union. He proposed last month that Athens take a "time out" of up to five years from the euro if it could not meet the conditions, an idea seen as a veiled expulsion from the common currency. Schaeuble was overruled by Chancellor Angela Merkel, who negotiated a July 13 euro summit deal in which Tsipras accepted tougher terms than those he had previously rejected in return for talks on a three-year loan to keep it in the euro zone. SMOOTH NEGOTIATIONS All sides agree the negotiations that began at expert level on July 20 have gone smoothly, with none of the obstruction and squabbles over protocol and access to data and ministries that marked previous rounds under Tsipras' leftist Syriza party. A senior EU official said cooperation from the Greek side has been "outstanding" with the institutions having had full access to ministers, ministries, files and figures. There have been few leaks on the substance - partly because many officials are on holiday but also perhaps a sign of serious intent on both sides. Greece reported progress this week on pension reform, a sticking point in the past. Other sensitive issues include taxation of farmers, labour law, liberalising product markets and cutting defence spending. On the creditors' side, the most sensitive issue is debt restructuring to ease Athens' burden. A senior Greek official said the two sides' assessments of the macroeconomic outlook and primary budget balance targets were very close and unlikely to be an obstacle to a deal. However, the official said Athens sought to defer removing tax breaks for farmers, particularly sensitive for the pro-European opposition New Democracy party, until after aid is disbursed and the first bailout review completed, three months into the programme. Greece might hold early elections before then. -Reuters