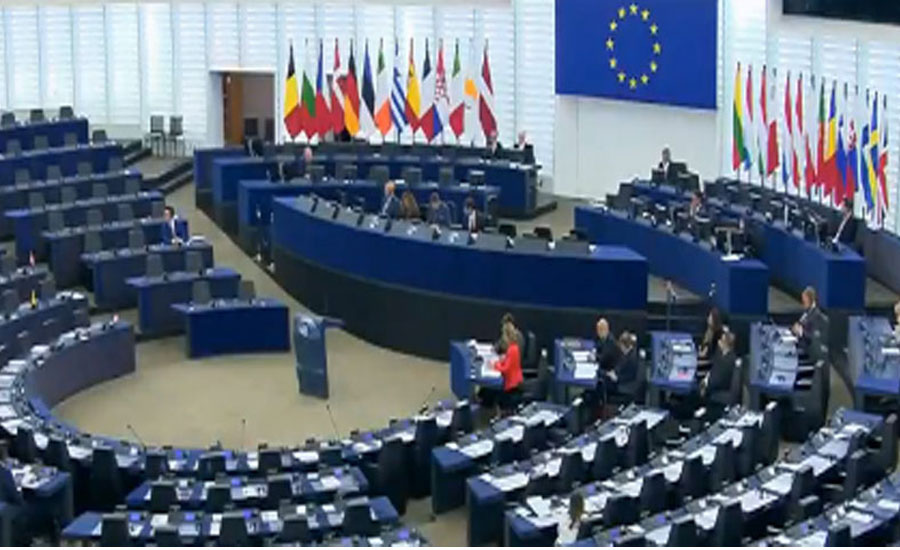 BRUSSELS (92 News) – Kashmir issue was discussed in the European (EU) Parliament after 12 years as they demanded India to lift immediately communication blackout and curfew in Indian Occupied Kashmir (IoK). The EU parliament body has also urged Pakistan and India to engage in a direct dialogue with a view to a peaceful solution of Kashmir dispute in full respect of the international human rights obligations. Opening the debate on behalf of e High Representative of European Union for Foreign Affairs and Vice President of European Commission Federica Mogherini, EU Minister Tytti Tuppurainen said that no one could afford another escalation in Kashmir. She urged India and Pakistan to seek a peaceful and political solution, respectful of interest of Kashmiri population on both sides of the Line of Control (LoC). She said this is the only way to solve the long-lasting dispute to avoid instability and insecurity in the region. The EU minister underlined the importance of avoiding further escalation, saying our position on Kashmir remains unchanged. She said freedom of movement and means of communication should be fully restored as well as access to all essential services. Winding up the debate, Tytti Tuppurainen said that EU will continue to monitor closely the situation with focus on de-escalation of situation involving two nuclear powers. On the other hand, curfew and lockdown continued at 45th consecutive day on Wednesday (today) in Indian Occupied Kashmir (IoK) from August 5 when Narendra Modi government announced scraping of the special status of Jammu and Kashmir. The occupied territory continued to reel under strict military siege and curfew on the 45th consecutive day as all markets are closed while transport is off the road. The authorities relaxed restrictions to a limited extent in some areas and opened schools but the students failed to turn up as parents were unwilling to send their children to schools in view of their safety.