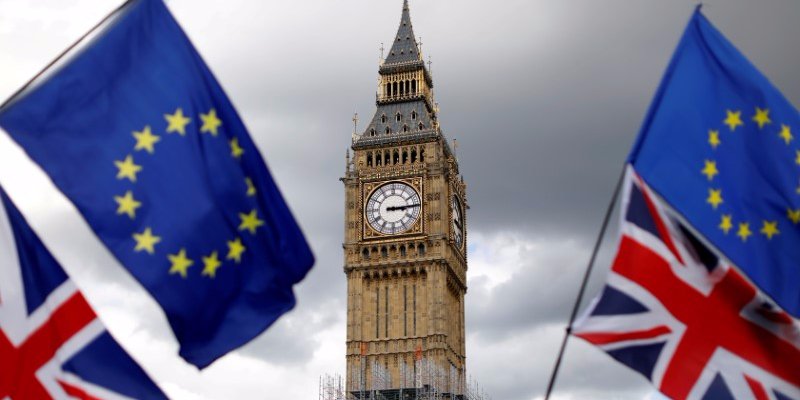 BRUSSELS (Reuters) - Britain will guarantee rights for as yet unborn children who join EU parents after Brexit and accept EU judges’ rulings on such rights, according to a draft European Parliament resolution seen by Reuters on Thursday. The document, drafted on Monday for a vote next week before an EU summit that may launch talks on a future EU-UK free trade pact, also confirms that British Prime Minister Theresa May has secured agreement from Brussels that British citizens in the EU will be able to live freely in any member state after Brexit. The resolution was prepared on the basis of an agreement May was about to sign on Monday before objections from her allies in Northern Ireland forced a postponement due to concerns on a plan to keep “regulatory alignment” between the province and the EU “to ensure no hardening of the border on the island of Ireland”. It also lays out demands from the legislature, which must approve any treaty. These include limiting British benefits from any future agreement and an insistence London continue to abide by the European human rights convention. It also insists that Britain automatically adopt any new EU legislation passed after it loses its vote during a transition period after March 2019. The draft makes no mention of a point under discussion on Monday when talks were interrupted that would end supervision of EU citizens’ rights by the European Court of Justice after a certain number of years. Two EU sources said that a compromise of 10 years - midway between a British offer of five and an EU demand of 15 years - appears the most likely solution. One EU source said the compromise may be presented as two years during the transition period plus eight years after that. May has insisted that the ECJ hold no more sway in Britain but the European Parliament has made the court’s involvement one of its priorities in safeguarding the position of some 3 million citizens of other EU states now living in Britain. The parliamentary resolution, drafted by five parties which hold the vast majority in the chamber, notes British agreement in detail to honour financial commitments to the bloc and to avoid a “hard” Irish border, two of three conditions on which the EU wants “sufficient progress” toward a divorce deal before it will launch the negotiations May wants on a free trade pact.   CITIZENS’ RIGHTS It goes into more detail on citizens’ rights, notably on issues where London had been resisting lawmakers’ demands. These included that “core family members and persons in a durable relationship currently residing outside (Britain) shall be protected by the Withdrawal Agreement and that this is also the case for children born in the future and outside (Britain)”. London, which does not grant its own citizens automatic rights to bring in foreign spouses, had sought to apply that to EU citizens after Brexit and also wanted to deny rights to British residence to any children born abroad after Brexit. Britain has also, according to the draft, accepted that EU citizens can “export all exportable benefits” as defined by EU legislation after the country leaves the European Union. And it has “accepted the competence of the (ECJ) in relation to the interpretation of the Withdrawal Treaty”. “Citizens’ rights will be guaranteed through a declaratory, light touch, proportionate procedure, consisting of a single form per family,” the resolution stated -- going some way to addressing lawmakers’ complaints that costs of hundreds of euros could be incurred by families making several declarations. Lawmakers are still pressing for the procedure to be free. In five months of negotiation, May has largely given way on EU demands. In one sign of a concession from Brussels, the resolution states that British citizens living in an EU state on Brexit Day, March 29, 2019, would retain their “right ... to reside and move freely in the whole EU”. Previously, the EU had said their residence rights might only be guaranteed in the particular member state in which they were living at the time.

Setting out demands for the new phase of negotiations to be launched at the Dec. 15 summit if May confirms her offers, the parliament stressed that any transition period -- of “not more than three years” -- to avoid a “cliff edge scenario” depends on a deal on the whole divorce package and would mean Britain being bound by all EU structures while no longer having a say on them. It ruled out “any trade off” in negotiations between British contributions to EU security and economic benefits for Britain and said the latter could not be as good as membership of the EU or of the EEA, whose members include Norway and Iceland. In any free trade agreement, “market access to services” -- a big part of British exports, notably in finance -- “will always be subject to exclusions, reservations and exceptions”. Any security and defence cooperation would be subject to EU rules on data protection, the resolution added, reflecting concern among lawmakers that Britain will seek an exception in return for sharing its recognised prowess in intelligence. Seeking to meet a end-of-the-week EU deadline for a deal on divorce terms in order to give EU states time before the summit to agree their offer on opening trade talks, May plans to present tweaked proposals on the Irish border in the coming day, the Irish prime minister said. Should she miss it, senior EU officials say, it could be February before they return to the issue -- raising concern that businesses will start switching more investment out of Britain. That delay, EU officials believe, could put May’s own weak position in jeopardy, and throw new doubt on the process. A senior official closely involved in the talks said however that member states, including power couple Germany and France, seem in no mood to ease demands on Britain to ensure a quick accord.