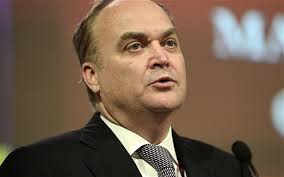 (Reuters) - Russian Deputy Defence Minister Anatoly Antonov is the highest-profile target of new sanctions due to be formally endorsed by European Union foreign ministers on Monday, diplomatic sources told Reuters. Envoys of the 28 EU governments agreed this week on a list of Russian and pro-Moscow Ukrainian people and organisations that will be added to the EU's sanctions list in its latest response to violence by pro-Moscow rebels in Ukraine. The list, to be submitted to ministers on Monday, includes 19 Ukrainian or Russian individuals and nine organisations, one of them Russian. Their names remain confidential for now. However, diplomatic sources said on Friday that Antonov, one of several deputies to Defence Minister Sergei Shoigu, would be the most senior of five Russians on the list alongside 14 Ukrainian separatists. Some hawkish EU states pushed for sanctions against Shoigu himself. The compromise was to target Antonov, the sources said. Aged 59, he is a long-serving diplomat who is responsible for international military cooperation. He has vast experience of negotiations on issues such as chemical and biological weapons and on the non-proliferation of nuclear arms. He has made several outspoken comments in recent months that may have irked the West, including accusing NATO in December of turning Ukraine into a “frontline of confrontation” with Russia. Antonov was listed as being among the participants at the annual security conference under way in the German city of Munich. The EU was preparing to expand its sanctions list as two EU leaders, German Chancellor Angela Merkel and French President Francois Hollande, flew to Moscow in a last-ditch effort to negotiate a peace deal for Ukraine. EU leaders have been struggling to maintain a common front against Moscow after imposing rounds of sanctions last year that have hurt limping EU economies and worried those EU governments which would prefer a more conciliatory approach to Russia. Moscow denies direct involvement in the Ukraine conflict despite NATO's assertions its troops are supporting the rebels. EU leaders will meet next Thursday at a summit in Brussels where they could ask the EU executive to draw up further possible measures against Russia. Diplomats have said that a tightening of restrictions on major Russian companies' access to finance could be considered. However, internal divisions could limit the EU's ability to do more.