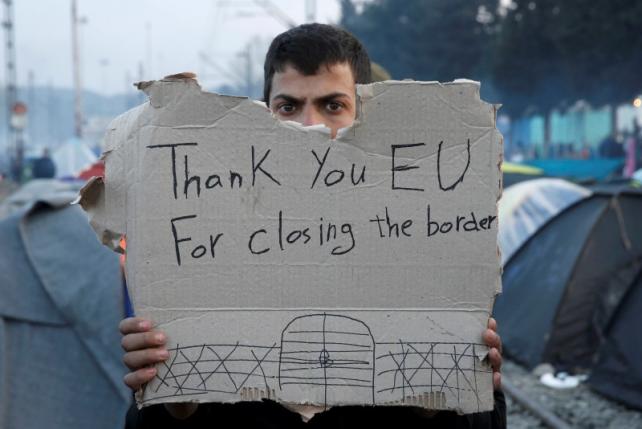 BRUSSELS – European Union leaders concluded a controversial deal with Turkey on Friday intended to halt illegal migration flows to Europe in return for financial and political rewards for Ankara. The accord aims to close the main route over which a million migrants and refugees poured across the Aegean Sea to Greece before marching north to Germany and Sweden in the last year. But deep doubts remain about whether it is legal or workable. After a morning of talks with Turkish Prime Minister Ahmet Davutoglu, European Council President Donald Tusk recommended that the 28 EU member states approve the text without changes and they rapidly agreed at a summit lunch in Brussels. "Agreement with Turkey approved. All illegal migrants who arrive to Greece from Turkey starting March 20 will be returned!" Czech Prime Minister Bohuslav Sobotka tweeted, before Tusk confirmed unanimous agreement among the EU and Turkey. Under the pact, Ankara would take back all illegal migrants who cross to Greece, includingSyrians, in return for the EU taking in thousands of Syrian refugees directly from Turkey and rewarding it with more money, early visa-free travel and progress in its EU membership negotiations. Migrants who arrive in Greece from Sunday will be subject to being sent back to Turkey once they are registered and their asylum claim is processed. A senior Turkish official said the returns would begin on April 4 and resettlement of Syrian refugees in Europe would begin simultaneously. The EU also agreed to accelerate disbursement of 3 billion euros (£2.3 billion) already pledged in support for refugees in Turkey and to provide a further 3 billion by 2018 once Ankara came up with a list of projects that qualified for EU assistance. While the talks were in progress, Turkish President Tayyip Erdogan accused the EU of hypocrisy over migrants, human rights and terrorism after supporters of the separatist Kurdistan Workers Party (PKK) set up protest tents near the summit venue. Erdogan said Europe was "dancing in a minefield" by directly or indirectly supporting terrorist groups. "At a time when Turkey is hosting three million, those who are unable to find space for a handful of refugees, who in the middle of Europe keep these innocents in shameful conditions, must first look at themselves," he said in a televised speech. Facing a backlash from anti-immigration populists across Europe, the EU is desperate to stem the influx but faced legal obstacles to blanket returns of migrants to Turkey. The summit discussions exposed considerable doubts among member states and EU lawyers over whether a deal could be made legal under international law, and human rights groups denounced the planned agreement as a sell-out of European principles. The EU leaders pressed Ankara to change its rules to extend international standards of protection to non-Syrian migrants, a condition for Greece to be able legally to return asylum seekers to Turkey. "All new irregular migrants crossing from Turkey into Greek islands from 20 March, 2016, will be returned to Turkey," the draft joint EU-Turkey statement seen by Reuters said. "This will take place in full accordance with EU and international law, thus excluding any kind of collective expulsion." It did not say whether this would entail changes in Turkish legislation. CYPRUS ROADBLOCK SIDESTEPPED Turkey's four-decade-old dispute with Cyprus had been a key stumbling block. Cypriot President Nicos Anastasiades insisted there could be no opening of new "chapters" in Turkey's EU talks until Ankara allows Cypriot traffic to its sea and airports - a result of a refusal to recognise the Cypriot state. But the issue was sidestepped because EU leaders agreed to open a negotiating chapter that was not one of the five blocked by Nicosia. An EU official said they would open chapter 33 on budget policy and accelerate preparations for negotiations in other areas. Anastasiades said he was "fully satisfied". Much of the debate among EU leaders on Thursday focused on ensuring that a plan that has outraged human rights groups could guarantee that those returned to Turkey would receive full protection, German Chancellor Angela Merkel said. Turkey's human rights record has drawn mounting criticism amid a crackdown on Kurdish separatists, arrests of critical journalists and the seizure of its best-selling newspaper. EU officials said Greece also needed time to set up legal and administrative structures to carry out the deportations and grant migrants individual asylum and appeal hearings. EU partners were expected to pledge additional manpower and resources to help Athens cope with the new challenge and with a backlog of 43,000 migrants bottled up on its territory since its northern neighbour Macedonia closed its border. Ankara's central objective - visa-free travel for Turks to Europe by June - will depend on Turkey meeting a raft of long-standing EU criteria. With French voters alarmed at the idea of nearly 79 million Muslim Turks free to travel, French President Francois Hollande stressed the need to fulfil all 72 conditions. –Reuters