EU unlikely to agree next week to prolong Russia sanctions 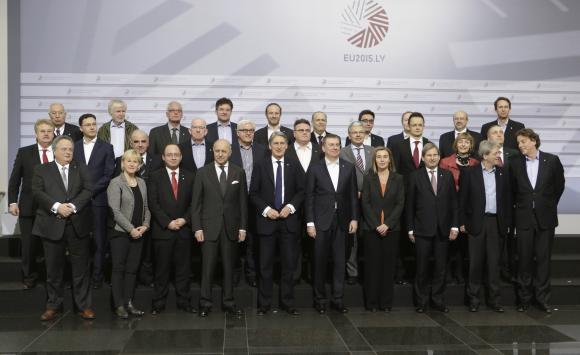 EU unlikely to agree next week to prolong Russia sanctions

BRUSSELS - European Union leaders are unlikely to reach agreement at their summit next week to prolong economic sanctions on Russia that expire in July, a senior EU official said on Friday. New sanctions on Russia are also off the table for now because EU governments want to give a chance to a fragile ceasefire in eastern Ukraine. But some of the EU's 28 member states had pushed for an early decision on extending sanctions on Russia's financial, energy and defense sectors adopted in July last year over Russia's annexation of Crimea and support for separatists in eastern Ukraine. While leaders will discuss sanctions at next week's summit, the senior EU official said a majority would probably want to hold over discussion of renewing the economic sanctions on Russia until July. "What will be the final point we will see in the Council (summit) but I don't think there is unanimity at all for the rollover of sanctions, the sanctions that are due in July," the official, briefing reporters on condition of anonymity, said. EU governments did agree on Friday to prolong sanctions against Ukrainian and Russian people and companies accused of undermining Ukraine's sovereignty, territorial integrity and independence. The asset freezes and travel bans on 150 people and 37 organizations were extended for a further six months, until September 15. Details will be published in the EU's Official Journal on Saturday. The decision was a legal formality after EU foreign ministers agreed in January to extend these sanctions. - Reuters