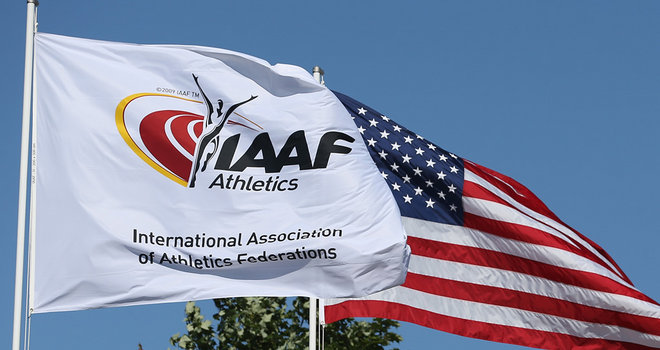 BEIJING - The United States will stage the world athletics championships for the first time after Eugene was surprisingly named as the 2021 host on Thursday. Eugene, the second largest city in the state of Oregon, lost out to Doha for the right to host the 2019 championships at a secret ballot held in Monaco earlier this year. But the International Association of Athletics Federation (IAAF) Council announced after a meeting in Beijing on Thursday that it had decided to bypass the usual bidding process and award the 2021 edition to Eugene. IAAF President Lamine Diack said the decision to skip the normal bidding process had been made after the sport's world governing body had heard submissions from the governor of Oregon, the US Olympic Committee (USOC) and television broadcaster NBC about the benefits of taking the championships to the United States. "In granting the championships to Eugene the IAAF Council have made a clear choice on a strategic decision that enables us to take advantage of a unique opportunity that may never arise again, whereby public authorities, the private sector, the national Olympic Committee, NBC and a particularly enthusiastic public are joining forces," Diack said. "Although this decision departs from the usual procedure, I am delighted that my Council colleagues understood the enormous opportunity presented to us to access a key market and have taken a decision in the interest of the global development of our sport." The IAAF said it was not the first time the world championships had been awarded to a city without a full bidding process, saying the most recent case was to award the 2007 event to Osaka, Japan. The world championships, currently held every two years, were first conducted in Helsinki in 1983. Beijing will host the championships this year with the next edition to be held in London in 2017. Thursday's unexpected announcement comes just three months after the US Olympic Committee named Boston as its candidate city for the 2024 Summer Olympics. The United States has not hosted the Summer Olympics since 1996, partly because of a long-running feud over television rights and sponsorship, but the mood has softened since the USOC and the International Olympic Committee reached an agreement two years ago on revenue sharing. Nicknamed TrackTown USA, Eugene and the city's University of Oregon have been the site of the past two US Olympic trials and will host the 2016 competition to select the American team for the Rio de Janeiro Olympics. It recently held the IAAF world junior championships and is the site of the annual Prefontaine Classic Diamond League meeting. Numerous national championships also have been held in Eugene and the 2016 world indoor championships are scheduled for nearby Portland, Oregon's largest city. "I thank President Diack, the Council and USATF President Stephanie Hightower and CEO Max Siegel in supporting the bid," said Vin Lananna, who led Eugene's bid for the championships. "We promise to deliver an outstanding championships for the sport of track and field in America and around the world." – Reuters