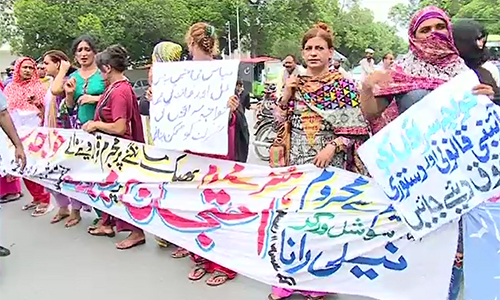 LAHORE (92 News) – Eunuchs took out a rally for government jobs on Saturday. The protesters, while clapping, marched from the Punjab Assembly to Press Club. They also chanted slogans against the Social Welfare Department and blocked the Mall Road. Motorists faced numerous problems due to the traffic mess caused by the road blockage. The protesters complained that they earn their livelihood through work hard, but the police arrest and handed them over to Edhi Centre. Social Welfare Department DDO Ashraf visited the protest site and held talks with the protesters. He assured the protesters of fulfilling their demands and invited them for dialogues on Monday.