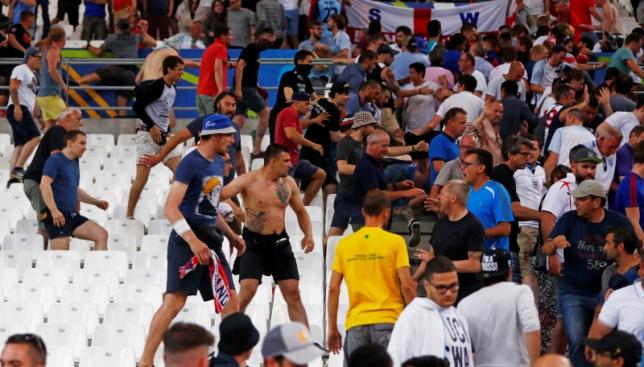 MARSEILLE - Violent clashes between fans spread to a second French city, tainting the opening days of the Euro 2016 football tournament and raising questions among supporters over policing tactics. Several hundred English and Russian fans squared off in Marseille, hurling beer bottles and chairs and drawing volleys of tear gas from riot police who struggled to contain the skirmishes in the narrow streets of the Vieux Port (Old Port). Later, in scenes that could draw sanctions from European football's governing body, UEFA, Russian supporters charged their English counterparts inside Marseille's Stade Velodrome moments after the final whistle of their teams' 1-1 draw. England fans were forced to scale fences to escape the charge, while shocking pictures of a father trying to protect his young son while masked Russian fans were kicking and punching retreating fans around him went viral and left fans fuming at the authorities' failure to intervene. The Russian team could now face an anxious wait after the crowd trouble. Four years ago Russia was sanctioned and handed a suspended six-point deduction following crowd trouble in Poland at Euro 2012. Meanwhile, along the Mediterranean coast, Northern Irish fans were involved in a ugly exchanges with locals in the city of Nice that left seven people hurt. European football's governing body, UEFA, condemned the day's events. "People engaging in such violent acts have no place in football," it said in a statement. Marseille's emergency services said 31 people were injured in Saturday's disorder, including one middle-aged man who was knocked unconscious, and one England supporter who suffered a heart attack. Broken glass and debris littered some roads and alleys near the waterfront, the focal point of clashes between English, Russian and French fans. The clouds of tear gas produced images of unrest all too similar, though on a much smaller scale, to those in the city 18 years ago when violence flared for two days and nights around England's World Cup game against Tunisia. While the tournament is being played under a state of emergency after militant Islamists attacked Paris in November, French police will be under pressure to snuff out the fan violence. France has deployed more than 90,000 police, soldiers and private security agents across the country to ensure safety for the tournament in the face of intelligence agency warnings of potential attacks on stadiums, fan zones or other soft targets. -Reuters