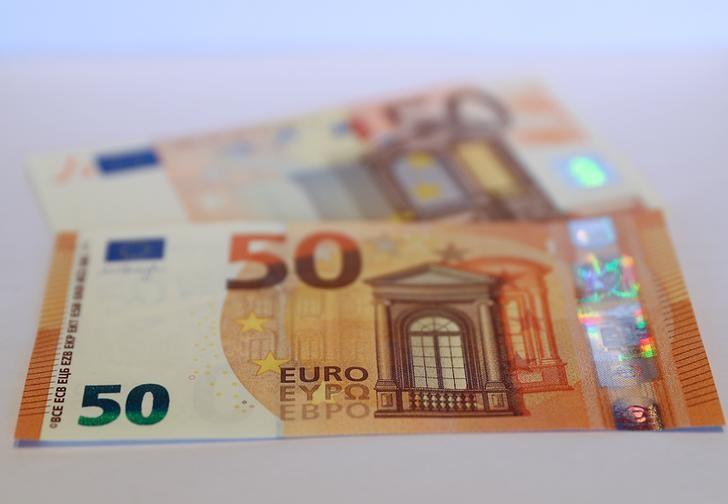 TOKYO (Reuters) - The euro held near two-year highs against the dollar on Friday after the head of the European Central Bank said tapering of its stimulus will be on the table this autumn, while a solid global economic outlook kept Asian share prices near decade highs.

Although ECB President Mario Draghi set no date for changes to the bond-buying plan, investors took his comments on Thursday as confirming their expectations that the discussions would lead to monetary tightening next year.

"Although bond markets didn't take his comments as something particularly new, the currency market liked the fact that Draghi confirmed his stance toward tapering," said Daisuke Uno, chief strategist at Sumitomo Mitsui Bank.

By late Asian trade, the euro stood at $1.1630 EUR=, maintaining its 1 percent gain on Thursday, its biggest since June 27, when Draghi first sparked expectations that the ECB will dial back its bond buying scheme.

Signs of steady global growth, which have prompted the ECB and a couple of other major central banks to signal future tightening since last month, have kept the world's shares on firm footing.

European shares are expected to be flat to slightly lower, with spread betters looking at a flat opening in Britain's FTSE .FTSE and a 0.1 percent fall in Germany's DAX .GDAXI and France's CAC .FCHI.

In Asia, MSCI's broadest index of Asia-Pacific shares outside Japan .MIAPJ0000PUS, which has gained about 5 percent in the past two weeks, eased 0.2 percent on Friday, dragged down by fall in material .MIAPJMT00PUS and financial .MIAPJFN00PUS shares.

MSCI's gauge of stocks across the globe .MIWD00000PUS was down slightly after rising for a 10th straight session on Thursday, its longest such streak since February 2015. It has advanced 3.1 percent in the latest rally.

U.S. quarterly earnings are expected to have climbed 8.6 percent, above the 8-percent rise projected at the start of the month, according to Thomson Reuters I/B/E/S. About 15 percent of S&P 500 companies having posted results so far.

Still, the major U.S. indexes were almost flat on Thursday, not helped by concerns about U.S. President Donald Trump's inability to push his through healthcare reform bills, the passage of which will be needed to finance his tax cut plans.

The dollar was also dogged by similar concerns, with its index against a basket of major six currencies .DXY =USD hitting its lowest level since August on Thursday. It last stood at 94.22, compared to Thursday's low of 94.09.

Against the yen, the U.S. currency hit a three-week low of 111.48 yen JPY= on Thursday even after the Bank of Japan Governor Haruhiko Kuroda dropped no hint of following other central banks in curtailing many years of stimulus. It last stood at 111.92 yen.

While the euro gained sharply on Draghi's comments, global bond markets reacted more calmly, partly as he did not give a clear signal on when the ECB will announce its tapering.

"I think it is unlikely that Draghi will announce tapering in September. Before the ECB reduced its bond purchase in April, Draghi had asked his staff to look into options in September, and three months later in December he made an announcement," said Hideki Kishida, a senior economist at Nomura Securities.

"This time he hasn't even tasked his staff to prepare options," he added.

In commodities, oil prices were little changed after choppy trading the previous day, as nagging worries about abundant global crude supplies sank prices after an early rally had boosted Brent above $50 per barrel for the first time since June 7.

Traders predicted prices would hold near current levels ahead of Monday's meeting between key OPEC and non-OPEC producers in St. Petersburg, Russia.