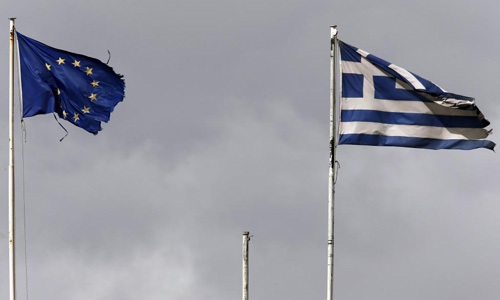 BRUSSELS/BERLIN (Reuters) - Greece secured a four-month extension of its financial rescue on Tuesday when its euro zone partners approved a reform plan, as Athens backed away from some proposed measures and promised that spending to alleviate social distress would not derail its budget. Finance ministers sealed the decision in a telephone conference convened by Eurogroup chairman Jeroen Dijsselbloem after the new leftist-led Athens government sent him a detailed list of reforms it plans to implement by the end of June. The respite, to be ratified by some national parliaments in the coming days, averted an imminent banking meltdown and a potential state bankruptcy for now, but tough negotiations lie ahead soon over the country's longer-term economic future. A Greek finance ministry official said the euro zone's most heavily indebted nation would start discussions immediately with its EU and IMF partners on meeting this year's financing shortfall. "The discussions on Greece's funding gap will begin tonight, tomorrow morning," the official said, speaking on condition of anonymity. Options included allowing Athens to issue more short-term t-bills and using ECB profits on Greek bonds, he said. As required by the creditors, Marxist Finance Minister Yanis Varoufakis had sent Brussels a six-page document late on Monday that watered down campaign promises to end privatizations, boost welfare spending and raise the minimum wage, vowing to consult partners before key reforms and to keep them budget-neutral. In a statement, the 19-nation Eurogroup urged Greece to develop and broaden the list of reform measures, based on "the current arrangement" -- a euphemism for the bailout agreement which leftist Prime Minister Alexis Tsipras had vowed to scrap. IMF Managing Director Christine Lagarde said the reform plan was "not very specific", and much clearer assurances would be needed on key reforms of pensions, taxation and privatization. ECB President Mario Draghi gave the list a guarded welcome and said he would keep a close watch on ideas that depart from previous pledges. He warned the radical new government in coded central banker language against plans to help Greeks walk away from their private tax and mortgage debts. "I would also again urge the Greek authorities to act swiftly to stabilize the payment culture and refrain from any unilateral action to the contrary," Draghi wrote. Financial markets surged even before confirmation of the extension of the 240 billion euro EU/IMF bailout, saving Greece from a potential disorderly exit from the euro zone. However, Dijsselbloem told the European Parliament the euro zone's most heavily indebted member was likely to need further assistance after two bailouts since 2010.   MARKETS RALLY   The Greek letter pledged not to reverse ongoing or completed privatizations, and to ensure that the fight against what the government calls the humanitarian crisis caused by bailout-driven austerity "has no negative fiscal effects". The document, seen by Reuters, contained few figures but promised to improve tax enforcement, fight corruption and "review and control spending in every area of government spending". Dijsselbloem said Athens may be too optimistic about how much revenue the planned tax crackdown would generate. Greek financial markets, which reopened for the first time since Friday's outline deal between Varoufakis and euro zone finance ministers, rallied strongly on relief that a meltdown had been averted for now. Government bond yields dropped by three percentage points and stocks hit a 2-1/2 month high due even though the country's longer-term survival in the single currency remains uncertain. Dijsselbloem, who is also Dutch finance minister, told EU lawmakers the euro zone could consider further debt relief if Athens met all the criteria specified in its November 2012 second bailout, "which hasn't happened yet". He insisted a Greek exit from the euro zone had not been discussed and was not on the table, adding that the only government to have held a meeting to prepare for a possible "Grexit" was in non-euro Britain. The ECB, which has been keeping Greek banks afloat with emergency liquidity assistance as deposits have flooded out, did not say when it might allow them to resume normal central bank funding using Greek government bonds as collateral. In EU paymaster Germany, Finance Minister Wolfgang Schaeuble, who took the toughest line in the Greek negotiations, wrote to the speaker of the lower house of parliament requesting a vote this week on extending the bailout. Germany's rejection of an initial Greek request for a six-month loan extension forced Athens into a string of politically sensitive concessions, postponing or backing away from campaign promises to reverse austerity, scrap the bailout and end cooperation with the "troika" of EU, ECB and IMF inspectors. The letter said Greece would phase in collective bargaining with a view to raising minimum wages "over time" but promised that any changes would be agreed with its partners. While Tsipras has won broad support in his coalition for the deal clinched in Brussels, some hardline leftists have criticized it and the conservative opposition has charged that his illusions have been punctured. On Saturday, Tsipras called the tentative accord a victory for Greece, but participants said Athens was isolated in the talks and forced to make humiliating concessions because its banks were running out of cash.