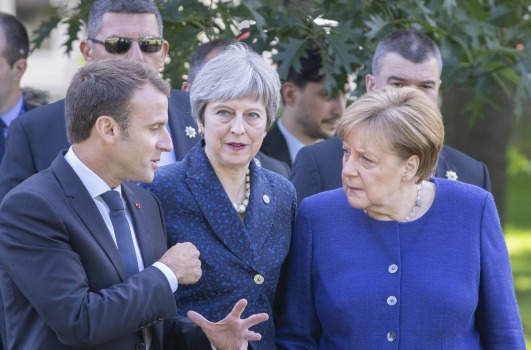 BERLIN (Reuters) - Diplomats from Europe, China and Russia are discussing a new accord to offer Iran financial aid to curb its ballistic missile development and meddling in the region, in the hope of salvaging its 2015 nuclear deal, a German newspaper reported on Sunday. The officials will meet in Vienna in the coming week under the leadership of senior European Union diplomat Helga Schmid to discuss next steps after the May 8 decision by US President Donald Trump to pull out of a 2015 nuclear accord with Iran, the Welt am Sonntag newspaper said, citing senior EU sources. Germany, France, Britain, Russia and China would participate in the meeting, but the United States would not, it said. It was not immediately clear if Iran - which has resisted calls to curb its ballistic missile programme in the past - would take part. Under the 2015 deal, Iran agreed to curb its nuclear programme in return for the lifting of most Western sanctions. One of the main complaints of the Trump administration was that the accord did not cover Iran’s missile programme or its support for armed groups in the Middle East which the West considers terrorists. Concluding a new agreement that would maintain the nuclear provisions and curb ballistic missile development efforts and Tehran’s activities in the region could help convince Trump to lift sanctions against Iran, the paper said. “We have to get away from the name ‘Vienna nuclear agreement’ and add in a few additional elements. Only that will convince President Trump to agree and lift sanctions again,” the paper quoted a senior EU diplomat as saying. No immediate comment was available from the German foreign ministry. The EU’s energy chief sought to reassure Iran that the 28-member bloc remained committed to salvaging the nuclear deal, and strengthening trade with Tehran. Officials from the EU, Germany and other countries that remain committed to the deal have said it would disastrous if EU efforts fail to preserve it. Iran has struggled to achieve financial benefits from the deal, partly because remaining unilateral US sanctions over its missile programme deterred major Western investors from doing business with Tehran. The officials are looking for a new approach given an understanding that it would be difficult for European firms to work around new US sanctions, the newspaper reported. It said the new deal could include billions of dollars of financial aid for Iran, in line with an EU deal that provided billions in aid to Turkey for taking in millions of migrants and closing its borders, which helped end a 2015 migrant crisis. Iran and European powers have made a good start in talks over how to salvage the 2015 deal but much depends on what happens in the next few weeks, Foreign Minister Mohammed Javad Zarif said last week.