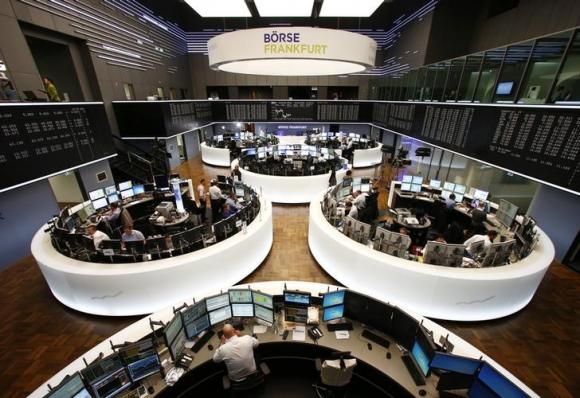 LONDON (Reuters) - European equities were set for a sixth straight week of gains on Friday, fuelled by a dramatic slide in the euro on the back of the European Central Bank's bond-buying plan that has kept euro zone yields near record lows. The past week, described by one strategist as a "game-changer", saw diverging central bank policies in the euro zone and the United States -- with the former battling to compress yields further while the latter paves the way for a rate hike -- drive the dollar to fresh 12-year highs versus the euro. Emerging markets, however, were set for a second week of losses as the stronger dollar and expectations of a US interest-rate hike kept up pressure on the region. Weaker energy prices, with Brent crude hovering at around $57 per barrel, have also hit investor confidence in oil-producing markets. Russia in particular was in focus ahead of a central bank monetary policy meeting at which the bank is expected to cut its main rate. The Russian rouble traded slightly weaker against the dollar in early trade on Friday. "I don't think its an exaggeration to say this week has been a game-changer," said Neil Mellor, a currency strategist with Bank of New York Mellon in London, pointing to recent forecast-beating jobs data out of the US and the launch this week of the ECB's quantitative easing (or QE) bond-buying program. "The combination of last Friday's (US) jobs numbers and the launch of QE in Europe this week has cemented the picture of monetary policy divergence." The MSCI All-Country World equity index .MIWD00000PUS was broadly flat at 420.97 points, with emerging-markets stocks .MSCIEF down 0.2 percent and the FTSEurofirst 300 pan-European index .FTEU3 up 0.1 percent. The dollar against a basket of six major currencies .DXY was slightly weaker at 99.36 but still close to its highest trading levels since 2003. The greenback had a slight downward blip after disappointing US retail sales data for February, a month marked by harsh weather. That tempered the outlook for first-quarter growth and gave investors reason to doubt that the Federal Reserve might hike interest rates as early as June. However, many investors' rate-hike bets remained intact after last week's stronger-than-expected US payrolls report. The Fed's policy-setting committee meets on March 17 and 18, and investors hope the meeting will yield further clues about the timing of the rate increase. Asian shares put in a mixed performance across the region on Friday but were underpinned by gains on Wall Street. Japan's Nikkei stock average .N225 rose 1.4 percent to a fresh 15-year closing high, marking its fifth straight winning week. "There has been more money going into Japan - that has been a consistent theme for the last three weeks," said Sean Darby, global equity strategist at Jefferies. The yen's weakness against the dollar, as well as companies returning cash via dividends and share buybacks, are supporting the stock market.