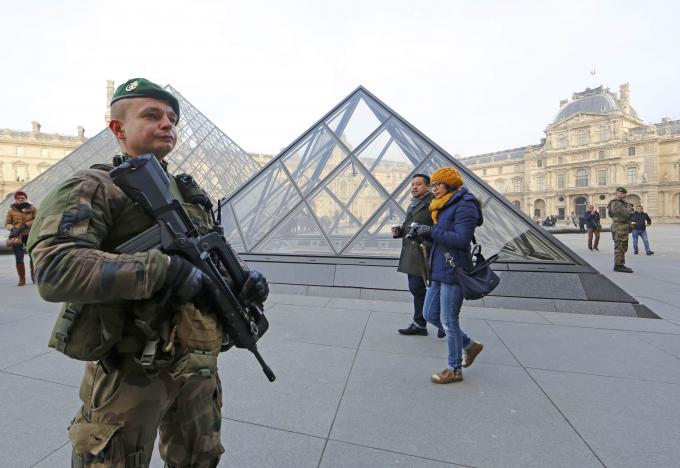 BERLIN/PARIS – European capitals tightened security on Friday ahead of New Year's celebrations, erecting concrete barriers in city centers and boosting police numbers after the Islamic State attack in Berlin last week that killed 12 people.
In the German capital, police closed the Pariser Platz square in front of the Brandenburg Gate and prepared to deploy 1,700 extra officers, many along a party strip where armored cars will flank concrete barriers blocking off the area. "Every measure is being taken to prevent a possible attack," Berlin police spokesman Thomas Neuendorf told Reuters TV. Some police officers would carry sub-machine guns, he said, an unusual tactic for German police.
Last week's attack in Berlin, in which a Tunisian man plowed a truck into a Christmas market, has prompted German lawmakers to call for tougher security measures.
In Milan, where police shot the man dead, security checks were set up around the main square. Trucks were banned from the centers of Rome and Naples. Police and soldiers cradled machine guns outside tourists sites including Rome's Colosseum. Madrid plans to deploy an extra 1,600 police on the New Year weekend. For the second year running, access to the city's central Puerta del Sol square, where revellers traditionally gather to bring in the New Year, will be restricted to 25,000 people, with police setting up barricades to control access. In Cologne in western Germany, where hundreds of women were sexually assaulted and robbed outside the central train station on New Year's Eve last year, police have installed new video surveillance cameras to monitor the station square. The attacks in Cologne, where police said the suspects were mainly of North African and Arab appearance, fueled criticism of Chancellor Angela Merkel's decision to accept nearly 900,000 migrants last year. The Berlin attack has intensified that criticism. In Frankfurt, home to the European Central Bank and Germany's biggest airport, more than 600 police officers will be on duty on New Year's Eve, twice as many as in 2015. In Brussels, where Islamist suicide bombers killed 16 people and injured more than 150 in March, the mayor was reviewing whether to cancel New Year fireworks, but decided this week that they would go ahead. PARIS PATROLS In Paris, where Islamic State gunmen killed 130 people last November, authorities prepared for a high-security weekend, the highlight of which will be the fireworks on the Avenue des Champs-Élysées, where some 600,000 people are expected. Ahead of New Year's Eve, heavily armed soldiers patrolled popular Paris tourist sites such as the Eiffel Tower, the Arc de Triomphe and the Louvre museum. In the Paris metropolitan area, 10,300 police, gendarmes, soldiers, firemen and other personnel will be deployed, police said, fewer than the 11,000 in 2015 just weeks after the Nov. 13 attack at the Bataclan theater. Searches and crowd filtering will be carried out by private security agents, particularly near the Champs-Élysées where thousands of people are expected, authorities said. Across France, more than 90,000 police including 7,000 soldiers will be on duty for New Year's Eve, authorities said. On Wednesday, police in southwest France arrested a man suspected of having planned an attack on New Year's Eve. Two other people, one of whom was suspected of having planned an attack on police, were arrested in a separate raid, also in southwest France, near Toulouse, police sources told Reuters. "We must remain vigilant at all times, and we are asking citizens to also be vigilant," French Interior Minister Bruno Le Roux told a news conference in Paris, noting that the threat of a terrorist attack was high. In Vienna, police handed out more than a thousand pocket alarms to women, eager to avoid a repeat of the sexual assaults at New Year in Cologne in 2015. "At present, there is no evidence of any specific danger in Austria. However, we are talking about an increased risk situation," Interior Minister Wolfgang Sobotka said. "We are leaving nothing to chance with regard to security." In Ukraine, police arrested a man on Friday who they suspected of planning a Berlin copycat attack in the city of Odessa. –Reuters