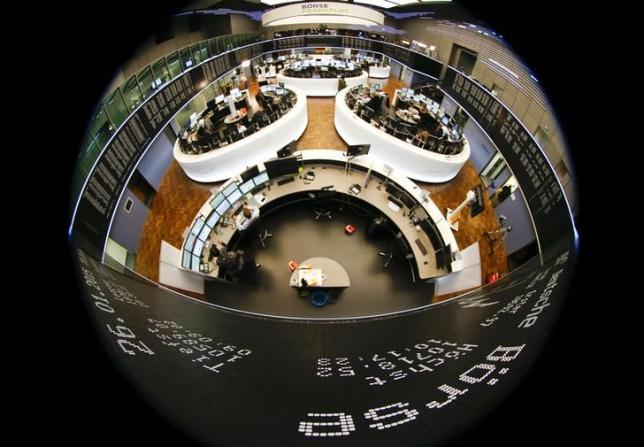 LONDON - European shares were heading for their biggest weekly fall of the year on Friday, as a second week of gains for oil prices and periphery euro zone bond yields brought to a halt a two month bonanza for the region's equity markets. Trading on the day was choppy with oil dropping back after Thursday's spike and the world's regional share and currency markets mixed as investors assessed the wider global impact of the rising tensions in the Middle East. Asian shares dropped overnight but the pan-European FTSEurofirst .FTEU3 tip-toed higher as a 0.2 percent fall for Britain's FTSE .FTSE was offset by 0.6 and 0.1 percent gains on Germany's DAX .GDAXI and France's CAC 40 .FCHI. They were given help as a rebound by the recently subdued dollar pushed the euro back down towards $1.08 EUR=, but for the week the FTSEurofirst 300 was down almost 2 percent, its worst run since mid-December. "I'm not surprised that European shares are fading their gains," said Gavin Friend, a strategist at National Australia Bank in London, who said it was largely down to currency dynamics. "The dollar is back stronger again today, but we seem to have gone through the period where the dollar was rampaging through markets. That brought all kinds of (US) policymakers out of the woodwork and now we are in more of two-way market." Crude oil prices were lower due to the dollar's bounce and as investors reassessed the potential impact of the escalating conflict in Yemen, where Saudi Arabia and allies carried out air strikes on Iranian-backed Houthi rebels on Thursday and Friday. US crude CLc1 was down 2.3 percent at $50.33 a barrel after jumping 4.5 percent, while Brent LCOc1 was 2 percent lower at $58.02. [O/R] The Saudi-led operation has not affected the oil facilities of major Gulf producers, but the fear is the conflict could spread and further unsettle the Middle East and disrupt oil shipments. Goldman Sachs, however, said it expected the Yemen military action, but also a potential nuclear deal with Iran that could lead to a loosening of sanctions, to have little near-term impact on oil supply. PERIPHERY YIELDS RISE Much of the run up in European markets has come as the European Central Bank has launched a 1 trillion euro bond buying campaign. But with the program already showing signs of lifting the euro zone economy, talk is starting to emerge in markets about the bank slowing its buying next year. Italy IT10YT=TWEB, Spain ES10YT=TWEB and Portuguese PT10YT=TWEB bonds, which have been some of the biggest beneficiaries of the ECB's stimulus, were heading for a second week of rises in their yields despite mixed fortunes on Friday. [GVD/EUR] The dollar's recovery pushed it back up 119.40 yen JPY= having hit a five-week trough of 118.33 on Thursday, while the euro's drop on the day was putting it flat for the week. While keeping a close eye on developments in the Arabian Peninsula, the markets are also waiting for a speech by Federal Reserve Chair Janet Yellen later in the session. Yellen is scheduled to speak on monetary policy and her comments will be closely analyzed after the Fed's dovish outlook last week bruised the dollar. Excluding the effect of last year's sales tax increase, data released on Friday showed Japan's core consumer price index was flat in February compared with a year ago. It was the first time it has not risen in nearly two years, and will be disappointing for a government that is seeking to end a long phase of deflation. The yen showed little reaction. ECONJP Among the Asian equities, indexes in Hong Kong, South Korea, Malaysia and Thailand suffered light losses. Japan's Nikkei .N225 handed back earlier gains and slid 1.3 percent. "Hedge funds and commodity trading advisors are seen taking profits and unwinding their options positions before the first quarter ends," said a senior trader at a foreign brokerage in Tokyo. - Reuters