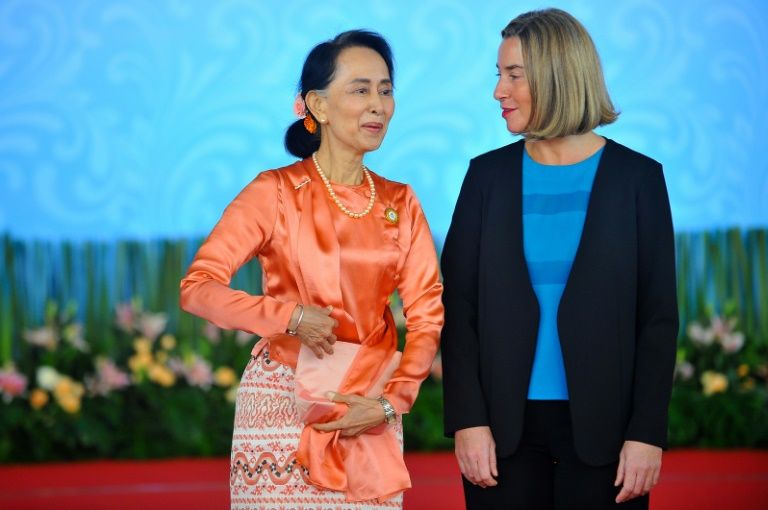 But her optimistic tone appeared sharply at odds with the realities on the ground in a crisis that has seen 620,000 Rohingya flee rape, murder and arson in Myanmar's Rakhine state since late August.

Deadly attacks by Rohingya militants on August 25 sparked a massive backlash from Myanmar's security forces that the UN says may amount to "ethnic cleansing".

Diplomatic pressure has been growing on Myanmar, especially on its Nobel Peace Prize-winning leader Suu Kyi.

In response the country has said it is ready and willing to take back refugees, if they can "verify" they belong in Rakhine.

Mogherini, who visited refugee camps in Bangladesh's Cox's Bazar over the weekend, emerged from Monday's talks with Suu Kyi in a positive mood.

"I found it (the talks) extremely encouraging," she told reporters in Myanmar's capital Naypyidaw at a meeting of Asian and European foreign ministers.

"I am very much encouraged by the possibility -- that I believe is real and concrete -- of Myanmar and Bangladesh" reaching an agreement for the repatriation of refugees.

The two countries have yet to strike a binding deal on repatriation.

Rights groups say a speedy and safe repatriation of significant numbers of Rohingya is highly unlikely since large numbers are still fleeing violence, fear and hunger on a daily basis.

The status of the Muslim minority also remains highly emotive in Buddhist-majority Myanmar, where they are denied citizenship and labelled "Bengalis", or illegal immigrants from Bangladesh.

Rohingya villages have been razed and rice fields commandeered or left to ruin, raising major questions over what they can return to.

Hundreds of thousands of Rohingya, pushed out of Myanmar in several previous army-backed operations, have also yet to return despite decades-old repatriation deals with Bangladesh.

Those who have fled Rakhine in recent months have told horrific stories of rape, murder and arson by Myanmar troops and ethnic Rakhine Buddhists.

Myanmar's diplomatic isolation over its treatment of the Rohingya has been eased by China, which has helped shield it from censure at the UN Security Council.

China was one of the few foreign friends of the country's former junta.

Beijing covets access to Myanmar's western coast for ports and pipelines including in Rakhine state, where Chinese businesses are spending billions of dollars.

On Sunday Foreign Minister Wang Yi met Suu Kyi and reaffirmed support for Myanmar over the Rakhine issue, according to the state-backed Global New Light of Myanmar newspaper.

He added that "poverty alleviation" was the crux of the problem and urged Myanmar and Bangladesh to solve the crisis through "dialogue".