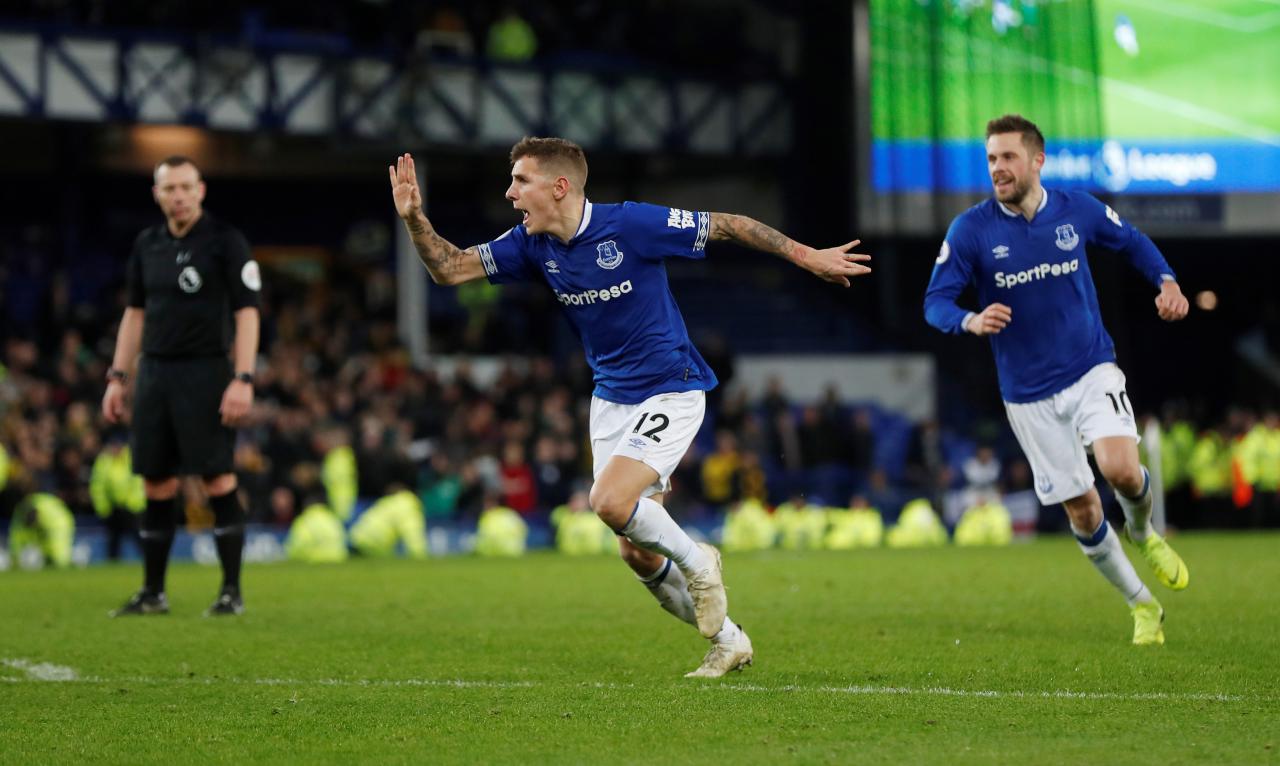 LONDON (Reuters) – Everton’s France defender Lucas Digne scored with a superb free kick deep into added time to salvage a 2-2 draw with Watford in a frenetic Premier League clash at Goodison Park on Monday. Richarlison had given the home side an early lead before Watford made it 2-1 with two goals in three minutes just past the hour mark, Seamus Coleman scoring an own goal and Abdoulaye Doucoure powering home a header. With Gylfi Sigurdsson spurning the chance to equalise for the hosts when his penalty was saved just minutes later, Watford looked to be heading for a win but Digne then popped up with his first Everton goal to salvage a point. The night had started well for the Merseysiders, looking for the win that would have lifted them above Manchester United into sixth place, when Brazilian striker Richarlison scored against his old club after a quarter of an hour. The goal was controversial, however, with Everton’s Theo Walcott appearing to be offside in the build-up. “I prefer not to say anything about the referees,” said Watford manager Javi Gracia. “If VAR was ready today the result would have been different.” Everton’s Coleman then put through his own goal in the 63rd minute when Roberto Pererya’s effort hit the post and rebounded off the defender into the net, before Doucoure put the visitors in front when he rose above Coleman to head firmly home. Three minutes later Christian Kabasele clumsily fouled Everton defender Yerry Mina in the penalty area but Sigurdsson’s spot kick down the middle was saved by the legs of Ben Foster. It was the Icelander’s second penalty miss from his last three. As the clock ticked down, mid-table Watford thought they had done enough for the win but France international Digne stepped up to curl his free-kick into the net and deny the visitors. “It showed personality and character to take that free-kick when people might have expected Gylfi. It’s a very good goal,” said Everton manager Marco Silva after facing his old club. However, the Portuguese coach was not happy about his side’s defending for Watford’s two goals. “We lost our focus completely. Those two moments were not too special. We are not happy with the result,” he said. “When you start like we start and achieve just one point, of course we are unhappy. Our goal for the match is completely different from the result.” Everton are seventh on 24 points, two behind Manchester United, while Watford are 12th with 21 points from 16 games.