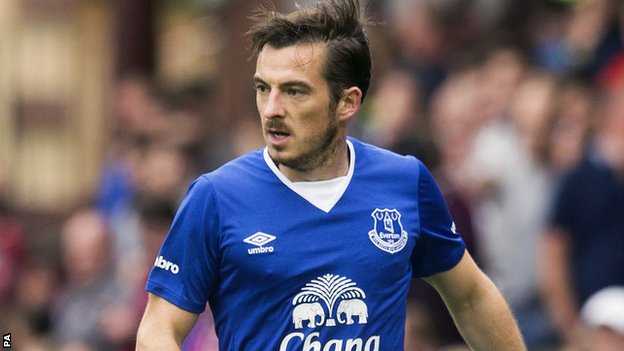 LONDON - Everton left-back Leighton Baines could be sidelined for a significant period after sustaining a freak training ground injury to his surgically-repaired ankle, manager Roberto Martinez has said. The England international missed Everton's 2-2 draw with Watford in their Premier League opener on Saturday after picking up the injury in training. "We don't know how long he will be out for, but it has been a real disaster," the BBC quoted Martinez as saying. The 30-year-old defender had surgery on the ankle in May and missed the tailend of the Premier League season as well as England's European Championship qualifier against Slovenia. "Everything had been perfect in Leighton's programme and he worked extremely hard in pre-season," Martinez told Everton's website. "He looked refreshed, he looked strong and he look at a really, really good level. "Then, in training, he blocks a ball and it hits him exactly in the same area where he had surgery, with the unfortunate result that he's going to be out for a while." Martinez also has concerns over the fitness of Kevin Mirallas, who left the field in the 77th minute after a heavy tackle from Watford's Valon Behrami. "He wanted to stay on the pitch, clearly. But he had a really nasty tackle and we're going to be assessing him in the next 48 hours," added Martinez. Everton got off to a slow start against promoted Watford and Martinez thought his side lacked intensity throughout the first half. Miguel Layun gave the visitors a 1-0 lead in the 14th minute and Everton toiled until Martinez brought on forward Arouna Kone in the 63rd minute. Ross Barkley scored a sensational equalizer 14 minutes from the end before Watford went 2-1 up through Odion Ighalo in the 83rd minute. Kone drew Everton level just a minute later and Martinez said the goal could be a turning point for the forward, who has struggled to regain form after a serious knee injury in 2013. "Arouna Kone arrived at Everton and I don’t know if a black cat crossed his path at Finch Farm (Everton's training ground), but everything went against him," said Martinez. "He was never able to get the momentum or luck and nobody got to see the best of Arouna. "When he came on the pitch, you could see he had to win the crowd over and I was delighted for him. He came up with a quality finish - that’s one of his strengths, running into the box and finding that corner. "I feel it can be a turning point and I hope everyone at Everton can see what he can bring to the team." - Reuters