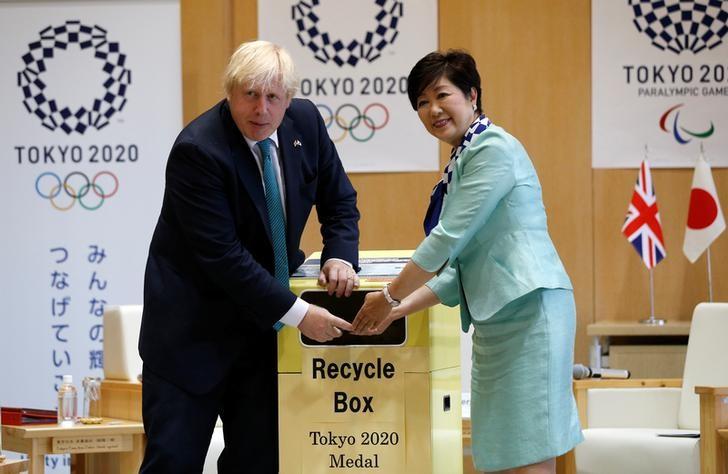 TOKYO (Reuters) - Britain's Foreign Secretary Boris Johnson, London mayor when the city hosted the 2012 Summer Olympics, advised Tokyo governor Yuriko Koike on Friday to shrug off criticism during the 2020 Games preparation period, saying everything will work out in the end.

Johnson, elected mayor in 2008, was eventually celebrated for his role in London's successful hosting of the 2012 games after weeks of negative headlines critical of planning mistakes and costs.

He congratulated Koike, who came to power a year ago, on the city's preparations and said she should take the next three years until the Games start on July 24, 2020, in stride, saying there are cycles in how the public and the media respond.

"First of all there's a euphoria when you get the games, and then a bit of anxiety starts to creep in, and it sort of goes downhill and people have all sorts of stories, we had all sorts of problems," Johnson told Koike at the start of a meeting.

"Then when finally the games begin, after it seemed as if you could do nothing right, then you can do nothing wrong and everybody gets behind you."

Johnson, in Tokyo to meet with officials including Prime Minister Shinzo Abe and Olympics Minister Tamayo Marukawa, added that he was sure Tokyo's Games, the second time the city has hosted, would be an "absolute sensation."

Though the International Olympic Committee (IOC) has also praised Tokyo's preparations to date, the city has faced a rough road since being awarded the games in 2013 that included the resignation of Koike's two predecessors due to scandals.

The original Games logo was withdrawn following plagiarism charges, and the first plans for the centrepiece National Stadium were scrapped due to ballooning costs, putting the start of the stadium's construction about a year behind schedule.

On Thursday, officials said that parents of a 23-year-old stadium worker who committed suicide have petitioned the government to recognise it as "karoshi," or death by overwork.

Media reports say he worked more than 200 hours of overtime in the month before his death due to tight deadlines created by the delays.