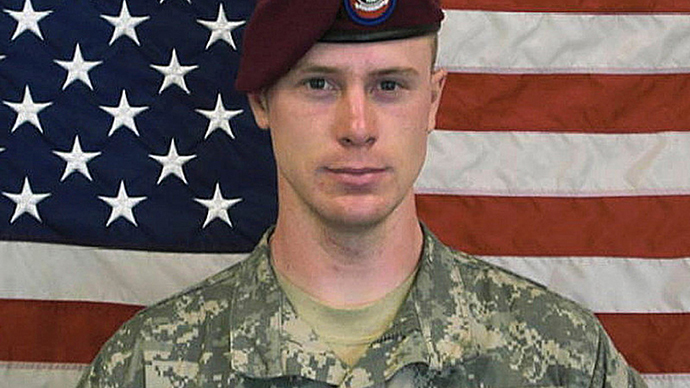 FORT BRAGG, N.C. - US Army Sergeant Bowe Bergdahl, a former Taliban prisoner in Afghanistan, was formally charged on Wednesday with desertion and misbehavior before the enemy, and could be sentenced to life in prison if convicted of the most serious count, the Army said. Bergdahl's attorney, Eugene Fidell of Yale Law School, said the Army had scheduled an Article 32 investigation hearing on April 22 to determine whether there was sufficient evidence to proceed with a court-martial. The Army said the investigation, similar to a civilian grand jury proceeding, would take place at Fort Sam Houston in San Antonio. Bergdahl, 28, was released from Taliban custody last summer in a controversial prisoner swap that saw five Taliban prisoners held at Guantanamo Bay, Cuba, transferred to Qatar, where they were required to remain for a year. Bergdahl disappeared on June 30, 2009, from Combat Outpost Mest-Lalak in Paktika Province in eastern Afghanistan and was subsequently captured. He disappeared from the outpost early one morning after doing guard duty, leaving behind his gun, ammunition and body armor. An initial wave of euphoria over Bergdahl's release was followed by a backlash among US lawmakers angry because they were not given 30 days' notice before the transfer of the Guantanamo prisoners, as required by law. Some of Bergdahl's former Army comrades also came forward and said they believed he deserted his post. Former Army Sergeant Evan Buetow, who served with Bergdahl, said on Wednesday that the former war prisoner had been treated fairly by the Army and needed "to answer for what he did." "He put all of our lives in danger," Buetow said. "Men from our company died, when I don't believe they would have if he wouldn't have left." 'IMPORTANT STEP' Republican lawmakers also backed the Army's decision to move ahead with the charges. Senator John McCain, head of the Senate Armed Services Committee and himself a Vietnam War prisoner, said it was an "important step" toward determining Bergdahl's accountability. Representative Mac Thornberry, head of the House Armed Services Committee, accused the administration of making the case more difficult by failing "to follow the law surrounding the release of the Taliban 5." Bergdahl's case has been under review by General Mark Milley, head of US Army Forces Command, who was asked to look at the circumstance surrounding Bergdahl's capture. As a result of the review, Bergdahl was charged with desertion with intent to shirk important or hazardous duty and misbehavior before the enemy by endangering the safety of a command, unit or place, said an Army spokesman at Fort Bragg, North Carolina, where Milley is based. The desertion charge carries a maximum prison term of five years, while the misbehavior count carries a maximum term of life in prison, he said. The charges also carry a number of other potential punishments, including a dishonorable discharge, reduction in rank to private and forfeiture of all pay. In a statement issued by his lawyers, Bergdahl said he was beaten by his Taliban captors a number of times with a copper cable or a thick rubber hose. He also said he tried to escape about a dozen times. Bergdahl's parents declined to comment on the Army's decision to charge their son. Some residents in his hometown of Hailey, Idaho, also expressed reluctance to comment on the developments, citing anger aimed at the community after it showed support for him following his release. A rally for Bergdahl was abruptly canceled last summer amid the political uproar. The family and several supporters received threats by email and telephone, Hailey officials said. Debbie O'Neill, one of the co-organizers of the canceled rally, said she thought people were shocked by the Army's decision on Wednesday. "Other than that, I think we have to wait for the military justice system to play out," she said. "I'm sure the military has enough evidence to back up the charges, but my heart breaks for him (Bergdahl)." After a period of rehabilitation following his release, Bergdahl was reassigned to military duties. He currently has an administrative role in an office at Fort Sam Houston. A spokeswoman at the base said it would be up to the lawyers to determine what would happen to Bergdahl now that he had been charged. – Reuters