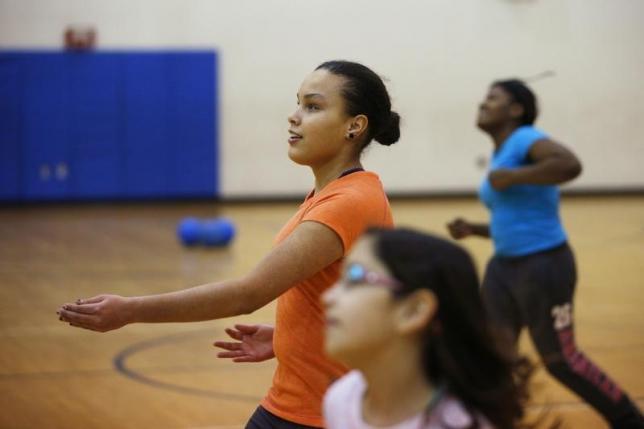 NEW YORK - Playing team sports and exercising during adolescence can have long-lasting benefits for women and may even reduce their risk of dying from cancer and other causes later in life, a new study showed on Friday. Researchers who analyzed how often women exercised while in their teens found that being active for just 1.3 hours a week had a positive impact as they got older. "The main finding is that exercise during adolescence is associated with a reduced risk of mortality, or death, in middle aged to older women," Sarah J. Nechuta, an assistant professor of medicine at Vanderbilt Epidemiology Center and Vanderbilt-Ingram Cancer Center in Nashville, said in an interview. Women who were physically active in their teens had a 16 percent lower risk of dying from cancer and a 15 percent decreased risk of death from all causes, according to the study. "Our results support the importance of promoting exercise participation in adolescence," said Nechuta, "and highlight the critical need for the initiation of disease prevention early in life." The findings, which are published in the journal "Cancer Epidemiology, Biomarkers & Prevention" are based on data from a study of 75,000 women from Shanghai, China led by Wei Zheng at the Vanderbilt Epidemiology Center. Although the findings were based on data on women in China, the benefits of exercising during the teen years could be applicable to all women. "It general, there is no reason to believe that exercise participation would differ in the effect on women in general regardless of where they live," Nechuta said. Women in the study were aged between 40 to 70 years old when they were recruited from 1996 to 2000. They were interviewed about lifestyle factors and how much they exercised during their teens. There were 5,282 deaths after an average of nearly 13 years of follow-up, including 2,375 deaths from cancer and 1,620 from cardiovascular disease. After analyzing the data and adjusting for socioeconomic factors in adult life, the researchers found that women who exercised in their teens and as adults had a 20 percent lower risk of death from all causes compared to other women. "This is the first large prospective study among Asian women to look at adolescent exercise and mortality," Nechuta said. The study did not include the type of exercise but women who played team sports had a 10 percent reduced risk of death from all causes. - Reuters