Explosions in and around Baghdad kill 12 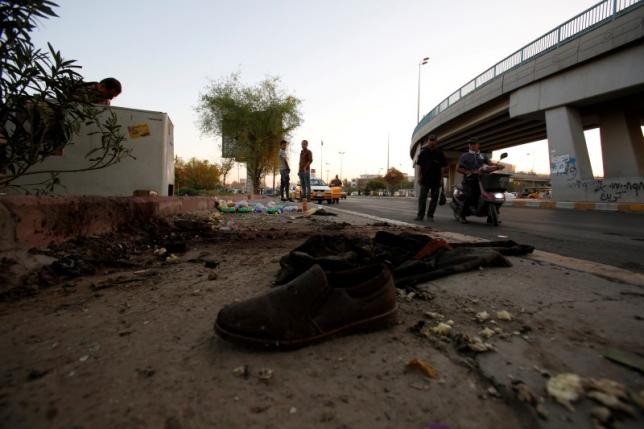 Explosions in and around Baghdad kill 12

BAGHDAD - Five explosions in and around Baghdad killed at least 12 people and wounded 27 others, police and medical sources said. There was no immediate claim of responsibility, but Islamic State regularly targets civilian areas and security forces in the capital. The ultra-hardline insurgents have lost ground in the past year to U.S.-backed government forces and Iranian-backed Shia militias, but such bombings show the group can still strike outside the territory its controls in northern and western Iraq. A shoe is pictured at the site of a suicide bomb attack as people look on, in the central Allawi district of Baghdad, Iraq September 11, 2016. The deadliest blast came in Arab al-Jabour, an area of date palm groves on Baghdad's southern outskirts, when an improvised explosive device went off near a civilian vehicle, killing four civilians. A bomb in a local marketplace in Taji, a northern suburb that hosts a large military base, killed three people and wounded nine, the sources said. A suicide bomber in the central Allawi district of Baghdad detonated his explosives vest, killing two and wounding eight. Two roadside bombs in the northern al-Husseiniya district and in Yousifiya, south of the city, killed three and wounded 10. -Reuters