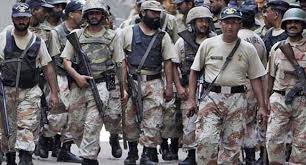 KARACHI (92 News) – The Sindh government has on Friday decided to use the provincial Assembly for the extension in the Rangers special powers under Article 147. Earlier, the Sindh government had extended Rangers special powers for one month but now decided to use the provincial Assembly platform in this regard. Sindh chief minister Syed Qaim Ali Shah has consulted the province’s Governor Dr Ishratul Ibad in this regard. It is pertinent here to mention that under ATA-4, Rangers conduct raid anywhere and anytime without warrants and can also carry out investigations.