Eyeliner too close to the eye leads to contamination 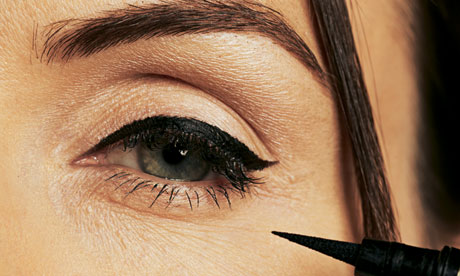 Eyeliner too close to the eye leads to contamination

NEW YORK - Eyeliner applied on the inside of the lash line is very likely to move into the eye itself and cause symptoms, according to a small study that captured migrating makeup on video. Eye doctors often see patients coming into clinics with eyeliner residue stuck to contact lenses or trapped in the coating over their eyes called the tear film, said Alison Ng, a postdoctoral fellow at the University of Waterloo in Canada who led the study. “We wanted to look at how differently eyeliner migrated into the tear film when applied in two different ways: inside the lash line and outside of the lash line,” Ng said in an email. Ng and her colleagues recruited three female subjects from the School of Optometry and Vision Sciences at Cardiff University in Wales. The participants were between ages 26 and 30 and had no known eye conditions. The volunteers were assigned to one of two groups, those applying eyeliner inside the lash line, close to the eye, and those applying eyeliner to the skin outside of the lash line, further from the eye. They returned the next day and received eyeliner in the opposite location. The researchers took video of each participant’s eyes five to 10 minutes after applying makeup and counted how many particles of eyeliner moved into the eye. They found that between 15 and 30 percent more particles moved into the eye when eyeliner was applied to the inside of the lash line. The makeup also moved more quickly into the eye when eyeliner was applied inside the lash line. A second round of videotaping two hours after applying the makeup showed there was little to no eyeliner remaining in the tear film. Ng’s team writes in Eye and Contact Lens that theirs is the first study to prove that particles from pencil eyeliner move into the eye. The researchers caution that the results may not apply to everyone because the participants were all Caucasian. Ng noted that Asian people’s eyelid shapes in particular may differ from those of the test subjects, but said that it’s unclear whether this will affect the way eyeliner moves into the eye. This pilot study used a glitter eyeliner pencil to more easily spot the particles, but Dr. Joseph Ciolino, a physician at Massachusetts Eye and Ear Infirmary, said the results can likely be applied to a range of different products. He mentioned that the same issues are probably true for mascara, as the dye from the makeup can build up in the tear duct and cause excess tearing. Getting eyeliner in the tear film can be uncomfortable, particularly for people with sensitive eyes or dry eye syndrome. People with dry eyes may have fewer tears to dilute the makeup, Ng noted. The study team writes that contact lens wearers also face issues. The waxes and pigments in makeup may bind to the contact lenses, reducing the quality of vision and potentially even causing blurred vision. Ciolino, who was not involved in the study, added that the build-up of makeup on contact lenses can also irritate the eye. He added that another potential issue with applying liner close to the eye arises “because the tip of the eyeliner can become seeded with bacteria, cosmetics have been implicated in eye infections.” Ng advised that makeup wearers can reduce the risk of complications by keeping products away from the inner lid margin. Ciolino agreed, “eyeliner should be applied on the outside of the lashes along the eyelid.” - Reuters